From the Super Mario Wiki, the Mario encyclopedia
< The 'Shroom:Issue 161
Jump to navigationJump to search

The MarioWiki is now fifteen years old! To celebrate, there has been various events in the community during the past few months which can be found here. The results of the various polls relating to the Mario franchise and the community from June are now public, being presented in creative and fun ways by various members of the community.

Perhaps in part due to the work put into the awards and the presentations, this is an extremely slow month for Fake News. A large amount of sections were not sent in on time, meaning only three sections, Obituaries, Monthly Inquisition, and TV Tomorrow, will be present this issue. I regardless hope that our readers will enjoy these sections.

As per usual, if you want to write for the 'Shroom, you can always check out the sign up page.

Without News Flush as competition, Quizmelon (talk)'s TV Tomorrow won with 20 votes. Monthly Inquisition, written by Goombuigi (talk) again received second place with 16 votes, and Coffee, Yoshi876 (talk), and AwdryFan1997 got third, forth, and fifth place with 12, 9, and 8 votes respectively. Thanks to all our readers for voting, and, even if there's less choice on who to vote for this issue, please do vote again! 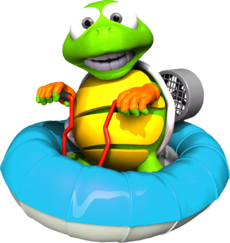 My word, those teeth! They are genuinely terrifying, this guy must've had terrible dental care, I can't imagine anyone wanting to get near him with pearly whites like those. Oh sorry, you appear to have caught me rambling ahead of this month's Obituary. So, let's delve into it, I regret to inform you that the turtle known as Tiptup has died. Most turtles can live to about 60 to 70 years, but sadly Tiptup did not make this age, instead dying at the age of 30ish.

And anyone wanting a more official figure than that might have to wait a while, considering the Mario series is incredibly sketchy on ages, and this is the best I have to go off of, considering he has *checks notes* 20 children! My word, he got busy! Anyway, looks like they all come from a different franchise, so I doubt I'll be able to get a quote out of them. Oh well.

Tiptup was most well-known for appearing in Diddy Kong Racing, and well that's pretty much it. He was a turtle who either drove a car, hovercraft or plane. The latter is most important here, as he died in an aerial accident when he accidentally flew into the lava on Hot Top Volcano. Why the people in this world keep building race tracks in areas with active volcanoes continues to amaze me.

Following Tiptup's death, many of the surviving racers from Diddy Kong Racing, like Drumstick, Bumper, Pipsy and Conker started a petition calling for all racetracks in future to pass safety regulations. They highlight have there are race courses not only in active volcanoes, but also in space, an active gold mine, many mountainous areas with boulders falling down and even a factory. The petition has so far attracted four signatures, zero if you exclude the petition's starters.

A memorial service will be held for Tiptup, given that the cremation has already taken place, and will be held next weekend. Attendees are reminded that Drumstick is a sentient chicken, and therefore no attempt should be made to cook him. However, should he one day die in Hot Top Volcano, people are advised to fish him out quickly for some tasty chicken drumsticks.

Hello, readers of the 'Shroom, and welcome back to another episode of Monthly Inquisition! Today, I'll be interviewing Waluigi, the one Italian dude from the Mushroom Kingdom that nobody seems to care about. Why is that so? Is there another side to his tragic story? Let's find out in today's interview!

The month is August. As I write this very article, I find myself trapped in a poorly-decorated hotel room, unenriched by the benefits of Internet connection and - horror upon horrors! - not even a television to bring some delight into this miserable existence. However can I write on the subject of television without so much as access to even the channels that fail to pick up Mushroom Kingdom services? But we writers must battle adversity. And soforth I will endeavour to write this article for your enjoyment. One can never be deprived of the top three television shows of tomorrow.

Wizpig proves to be a truly terrifying adversary in MKBC2’s The Rise of Wizpig.

New: The Rise of Wizpig
MKBC2, 10.30pm
Genre: Dark fantasy drama
This brand new series stars not Mario but Diddy Kong as the hero; yet our titular character is a cruel and powerful villain, the mysterious beast Wizpig, whose unexpected growth in power threatens not only the kart racing community but also the very fate of the Earth. Diddy Kong and a cast of colourful personalities must race to halt the increasingly omnipotent Wizpig before he conquers all - and their harrowing journey begins tomorrow. Not based on a true story.

The five Party Gems certainly look realistic - find out if they are tomorrow at 5pm.

Mushroom Kingdom Fake Finders
MKBC1, 5pm
Genre: Antiques show
Mario and Toad work together to host this art show all about finding rare art and determining whether or not it is fraudulent. In today’s episode, they are called to meet Kamek, a pseudo-magician who claims to possess five of the rarest and most expensive gems in the world - the Party Gems of Tenacity, Love, Spirit, Passion, and Courage. But are they just a convincingly sparkly illusion? The pair will have to turn to the professionals to find out if they are the genuine artefacts, just like every episode because neither of them are art experts themselves.

Revel in the nostalgia of Sniffit or Whiffit?, on MKBC2 at 6pm tomorrow.

The written word has prevailed, and therefore I have overcome not only my adversity but also my tendency to write my introductions like a despondent 19th-century novelist. Must just be a phase I’m going through. I have nothing further to add, and am mostly just filling space at the moment, so I’ll leave you with a relevant quote:

‘I’ll be back in September with another fresh batch of fictional programming.‘ - Quizmelon, August 2019