From the Super Mario Wiki, the Mario encyclopedia
< The 'Shroom:Issue 158
Jump to navigationJump to search

There's really nothing for me to say here. This month is the quiet before the storm of the awards. Be sure to check out the awards here! Without further ado, please enjoy the sections here.

Do you want a way to spend time during the pandemic? Writing for the 'Shroom is easy and fun! If you do decide to write for the paper, please sign up here.

Lord Bowser (talk) won again with 40 votes. Quizmelon (talk) and Coffee again one second and third place respectively. To all of our voters, thank you, and make sure to vote again!

What's up people! Welcome back to another edition of News Flush, featuring your devilishly handsome news anchor, LB! We're back here again to read off this past month's top headlines from across the world.

There's been quite a few interesting revelations from the celebrity world this time around! Everyone loves reading about them, watching them on TV, stalking their social media profiles, and trespassing their private property, so let's give them a closer look at what our favorite actors, artists, and rich people who are famous for being rich have been up to lately!

Famous actor Zip Toad has come under fire for a perceived inappropriate tweet regarding his fellow actress, Madame Flurrie. The actor, known for having a starring role in The Grodus Chronicles series, made the tweet in response to Flurrie's recent selfie posts on her own personal Twitter, which have taken the world by storm as a result of her natural beauty. The tweet in question simply reads, "Flurries kinda thicc tho", but already it has generated quite a buzz on Twitter and the rest of the Internet world, with some accusing Zip Toad of fatshaming, objectifying women, and worst of all, being horny on main. Several other celebrities have responded to the controversy surrounding Zip Toad's tweet with snarky tweets of their own; 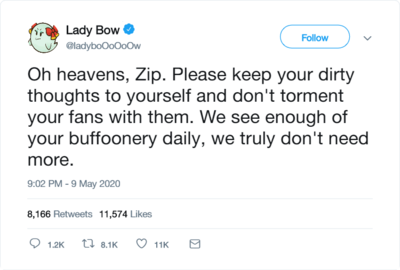 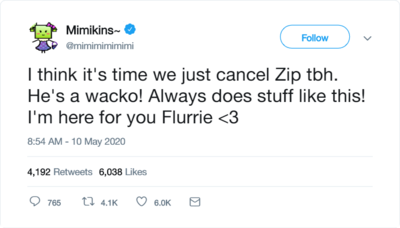 As for Madame Flurrie's own response, she only had this to say when questioned by our social media team;

Oh, Zip? Frankly, dears, I'm not in the least offended. It was certainly a strange thing to wake up to, especially with all the ruckus he inadvertently caused, but truly, I am flattered by him. I've received many a similar comment in the past, and I've grown used to it by now. I only hope Zip keeps his more... ah, intimiate... thoughts to himself, from now on! I certainly do myself, mm-hmm...

Regardless of Flurrie's lightheartedness, Zip Toad has faced intense scrutiny over his comment, causing him to make his Twitter private. The hashtag #CancelZipToad has been trending for several days since the incident.

Wealthy Bob-omb Family "Humbled" by Spending Only $100,000 In a Week "Like Normal People"

The extraordinarily wealthy Goldbob family has reached out to their followers on social media, detailing their week-long challenge of being constrained to a $100,000 budget for the three of them. The Goldbobs are known for their extravagant displays of wealth, stemming from Dr. Goldbob's highly successful pyrotechnics company. They were challenged by some disgruntled followers, disgusted by their massive wastes of money, to live "like a normal person" for a week and see what life was really like, and surprisingly enough, the Goldbobs listened. For a whole week earlier this month, they limited themselves to a tight budget of only $100,000 between the three of them. Dr. Goldbob's wife, Sylvia, detailed their struggles in a recent Facebook post. 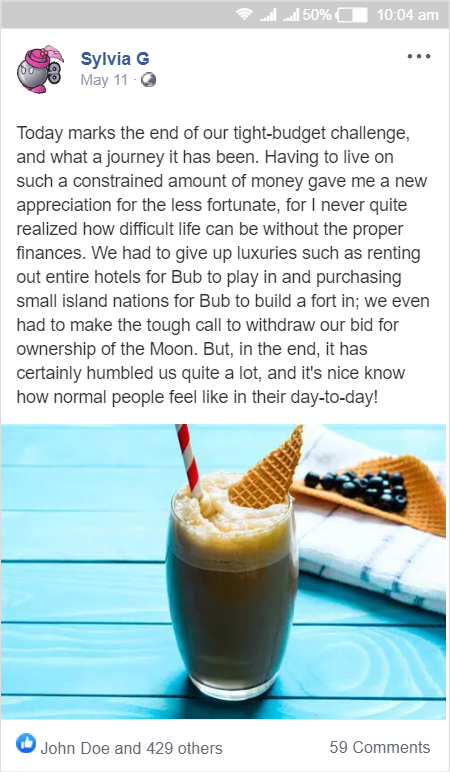 Sylvia's Facebook followers were delighted by the Goldbobs taking the challenge in stride, with many praising her and her family for their "bravery" and "courage" to pull off such a difficult task. One follower in particular took pity on the family for struggling so much during that week and offered them an all-expenses-paid trip to Isle Delfino to relax, which Sylvia graciously accepted. The Goldbobs said to expect photos of their lavish vacationing later this week. 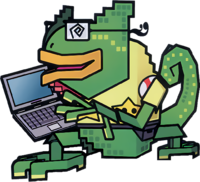 The famed chameleon Francis, known on YouTube for his videos showcasing his butterfly collection and various Let's Plays and streams of obscure video games, was reportedly taken to the hospital after showing sudden and severe withdrawal symptoms earlier this past week. According to a MeowMaid spokesperson for Francis, the Wi-Fi connection at his fortress failed after a power outage caused by a rogue thunderstorm, leaving Francis unable to access the Internet and complain about games he's never played on his Discord server. Francis immediately began to panic, and developed increasingly severe withdrawal symptoms, including confusion, irritability, depression, and foaming at the mouth, until his MeowMaid staff rushed him to a local hospital for treatment. Doctors there immediately provided Francis a laptop connected to the hospital Wi-Fi and allowed him to briefly browse Reddit as he slowly came to his senses. Upon recovery, Francis shared the following with his Discord server;

Nerrr... Scary day today. I didn't have wifi for a bit and it made me go crazy. Had to go to a doc's but I'm all sorted out now, nerr. I'm all nice and cuddled up in bed with my plushies and body pillows now <3 New LP coming soon, it's gonna be hi-technicaaaal!

Francis was asked by doctors to monitor his internet habits, diet, activity levels, sleep schedule, ability to do basic tasks, and dependency on others, though he reportedly screamed at them for overwhelming him with information.

And that's all there is for this month. The world of celebrity culture is certainly a strange one, but it does make for some juicy stories! This has been LB, signing out! 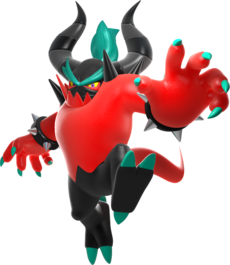 Olympic dreams have been shattered, and not just because the 2020 Tokyo Games have been postponed to 2021, but because acclaimed athlete Zavok has died, and will therefore be unable to attend them. Wow, the last part of that sentence reads like a lazy excuse note from a parent 'Sorry, Timmy has a doctor's appointment today, and will be unable to attend P.E. class.' Just for clarification, Zavok is dead, he's not getting some jabs and whatnot.

Zavok was a member of the Deadly Six, however, due to strict Mushroom Kingdom laws, the only other member of the Deadly Six allowed into the Marioverse was Zazz. Sadly, as a professional table tennis player, he was not able to comment on Zavok's boxing style, informing me that the two sports were very different. Apparently in boxing, you're allowed to punch an opponent, while this is frowned upon in table tennis, which might explain why I was banned from professional tournaments.

Much of Team Sonic was relaxing on the Copacabana Beach, and in an attempt to learn more about Zavok, I joined them. But I may have gotten a little distracted by actually being allowed outside and onto a beach that I spent so much time suntanning if this was a cartoon, me and Zavok would look nearly identical, bar sprouting horns and have massive claws, I know how to have a pedicure. Before I left with my horrific sunburn, Omochao offered me some advice. 'This section hasn't been funny for months' he whispered in my ear.

Zavok's funeral will be held in Sonic's world, somewhere in Windy Hill, but as I've only played Sonic Lost World the once, I don't really know much about that zone. So, I will presume that he is being buried in the Emerald Hill Zone, because let's be honest that's pretty much the only Sonic location you can actually name. The Deadly Six are currently considering a name change in the wake of Zavok's death, with the favourite being between the Deadly Five and the Deadly Six Minus One.

There is probably a poll somewhere that you can vote on this matter, perhaps it'll be at Zavok's funeral, or at the bottom of this page, if you click Obituaries.

Guys, what in the world were you thinking? Not only is this both illegal AND immoral, you're going to get the higher-ups angry. We're not running this ad in the paper. 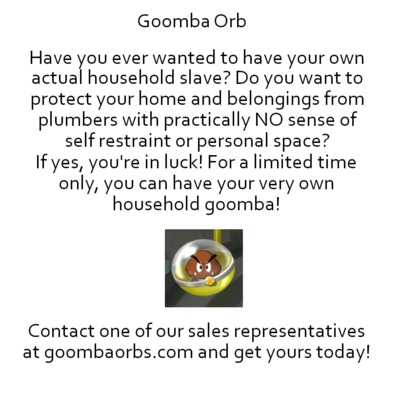 ‘Tis the merry month of May, and it would be silly to think of having May without having a TV Tomorrow article. It would be like cancelling Christmas, or postponing the Olympics; it just wouldn’t feel the same. Well, there’s no need to worry - TV Tomorrow is here, the highlight of each and every month, and your gateway to distinguishing spectacular from horrendous. I’ll stop needlessly pontificating about my own significance to the regularity of the universe and get on with three of the best TV shows on the box tomorrow.

The Road Trip season of BJ and the Koopalings premieres tomorrow on Koopa Troop TV.

BJ and the Koopalings: Road Trip
Koopa Troop TV, 8.30pm
Genre: Sitcom
After six successful series of the popular sitcom BJ and the Koopalings, the seventh series sees them leave the castle (read: the set was too expensive) to go on a wacky road trip around the world. The show, notable for its colourful ensemble cast and bizarre storylines, is widely assumed to be jumping the shark; but this first episode of the new series, which sees Bowser Jr. and his gang get hopelessly lost in the desert, retains the wacky humour the series is known for.

Luigi is at the heart of The Professor Investigates, tomorrow at 9pm on MKBC1.

New: The Professor Investigates
MKBC1, 9pm
Genre: Documentary/investigative reporting
After his well-publicised career of skilled research into paranormal activity, MKBC1 have given Professor Elvin Gadd his own six-episode television series to delve into unexplained mysteries and uncover strange stories. Tomorrow’s first episode, entitled ‘The Professor Investigates Luigi’, sees Gadd interview Mario’s mysterious brother, and ponder - is Luigi really as pathetic as he seems, or is he a puppet for some sort of ghostly master plan?

Get your racquets ready for Shy Guy’s Tennis Masterclass at 3pm tomorrow.

Shy Guy’s Tennis Masterclass
MKBC2, 3pm
Genre: Educational sports programme
With obesity still a problem in the Mushroom Kingdom despite Wario’s efforts, Star Cup champion Shy Guy has stepped into the frame to encourage young people to start playing more tennis with this latest edition of his Shy Guy’s Masterclass series. Nobody has yet pointed out that most people don’t keep their television next to their tennis court or even own a tennis court, but Shy Guy soldiers on regardless. Still no sign of what his face looks like though, I’m afraid, but the tennis tips might be useful.

So that’s it for television tomorrow. Remember; however much the world changes, and however much this may or may not upset you, one thing will remain forever consistent: TV Tomorrow will never change. You can always rely on it to be there, every month. At least until I die, or otherwise forget to do it one month for an arbitrary reason. Once that happens, you’re completely screwed. Let’s hope that doesn’t happen in June, which is when I’ll see you next for another edition of TV Tomorrow!