From the Super Mario Wiki, the Mario encyclopedia
< The 'Shroom:Issue 145
Jump to navigationJump to search

It's April! Welcome back to Palette Swap!

It's finally starting to feel like Spring around here, even though we just had a small snowstorm last week. I am SO ready for warmer temperatures. Hopefully, we hit 70 in May!

This month I can finally give you a review for Yo-Kai Watch 3: for me, it's the same as 2. A ton of tedious things that annoy me to no end are soothed away with a ton of things I find genuinely fun. I'd love to tell you to get it, but I can only give a hesitant recommendation because although I love this game, I know it won't work for everyone, and a lot of the things I found issue with are major parts of the game (like the story and characters), so go in with caution if you decide to go in at all. Next month I'll have a new review for you as well that's a bit different than usual, so keep your eyes on this space!

We've got a couple of great sections this month- Yoshi and Pitohui worked hard on them, so do give them a read! You won't regret it! ~FunkyK38

This month, once again, Yoshi876 (talk) takes the top spot with his What's on the Box? section covering the boxart of Yoshi's Story! Thank you to everyone who voted, and please do keep voting!

Let's go BOOM!
[read more]
Pyro updates his list of community projects!
[read more]
If you have time to read this, go practice your violin and piano!
[read more] 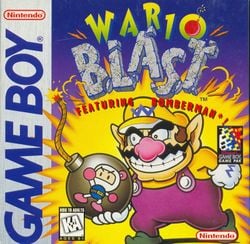 The Mario series has such a wide variety of spin-offs, so much so that even some of its own spin-offs have their own spin-offs. One such example is the Wario series, mainly split in Wario Land, and the more present WarioWare, but back on the Game Boy, this series had a different game, and it is that game that we'll be taking a look at today.

Wario Blast: Featuring Bomberman! is mostly a Bomberman game, but we're not here to dissect the gameplay, we're here to look at its boxart, and like a lot of Game Boy covers, there's not really a lot here to discuss.

It features Wario holding a bomb, with Bomberman on it, whether it's a logo or the actual Bomberman is still a mystery. Other than that, the only notable things featured are an explosion behind the pair and the 'o' in Wario being a bomb, which is a nice touch, the 'I' also resembles a 1, but I feel like that's more of a font choice rather than meaning anything. Another nice touch is how the stone-looking 'Blast' seems to be falling apart because of the explosion.

However, despite the boxart being a bit minimalistic, I think it works well in its favour. The other characters in the game aren't really well-known enough to justify putting them on the boxart, and it does cover the core game mechanic, that being bombs to destroy things, and it features the main characters that it needs to. So, while I usually use this section to rail against the boring boxarts in the series, I'll give this one a free pass, maybe I'm in a generous mood.

Covers of music from videogames have become a genre of their own, with thousands available from numerous artists, each with their own distinct style and approach. Of these artists, though, Tera Catallo, better known as TeraCMusic, stands out with a well-developed style which blends extensive use of the violin, the piano, and her own voice. With her focus on covers, her pieces are only occasionally lyrical, so, rather than singing, she uses her voice an additional instrument. It’s somewhat similar to the ominous pseudo-Latin chanting which so often comes up in dramatic songs, the use of a voice to add an additional dimension to a song.

You can see from her uploads that Tera has been at this for more or less eight years. It took her some time to develop her contemporary style, and it's possible to sample some of her pieces over time and see how her sound has evolved. The one element of her covers which has been present from the start is her emphasis on the violin as the central component of her pieces. ”Littleroot Town (ft. JTehAnonymous)" from 2013 demonstrates this well, lacking the more electronic sound, piano, or vocals which appear prominently in her later pieces. Instead, it focuses entirely on the violin and has more of an acoustic feel to it, especially with John Streese tinging the piece with a folksy sound. Her violin continues to be the centerpiece of her take on ”Dawn of the First Day (A Link Between Worlds)" in early 2014, though here the sounds of the violin are undergirded by a strong percussion element. By the time she released her cover of Bravely Default’s ”Silence of the Forest” in the same year, the elements of her contemporary style are all beginning to fall into place. While her combination of the three isn’t as refined as it is in her later pieces, “Silence of the Forest” does incorporate vocals, piano, and violin all in one piece. It’s also in this period that Tera makes one of her few lyrical pieces with Bravely Deafault’s ”World of Scattering Flowers”. This piece isn’t the only example of Tera singing Japanese lyrics, but there’s more to discuss with that later. 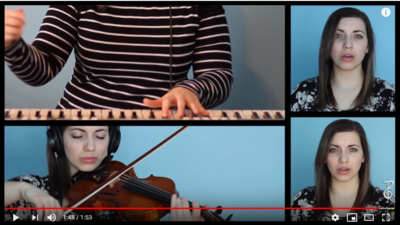 Three elements, blended together, have developed over time into a distinctive and pleasant style.

After putting together the basics of her style in the 2013-2014 period, Tera spends 2015 and 2016 further refining the elements she previously started to bring together. In ”And What if I Can’t?” from Fire Emblem Awakening moves closer to her contemporary style in terms of how it blends piano and strings together. Compare the fuller and richer sound which persists throughout the whole piece to the long stretches of piano only sections in “Silence of the Forest” from the previous year. The Lament of Falling Stars, a cover of Zinnia’s sorrowful theme from Pokémon Omega Ruby and Alpha Sapphire, further demonstrates this period of refinement. While the vocals in the piece aren’t as prominent as they are in her contemporary style, they’re better leveraged to fit with the piano and violin than they were previously.

Once 2017 comes around, Tera’s style has been refined into more or less what it is today, with pieces from 2017, 2018, and 2019 sounding closer to each other than to her previous work. It’s also at this point that it becomes easier to go and look back at her work, with there being complete playlists of her videogame covers for 2017, 2018, and 2019. At this point, listening to those playlists could provide a better idea of what Tera’s music sounds like than any words could, but there’s still some value in pointing out some highlights. While she’s created a much more refined blend of piano, violin, and vocals, the violin remains the center of her work and her playing on the strings can stand for itself. Take, for example, her ”Molduga (Sandworm) Cover ft. ViolinGamer” from The Legend of Zelda: Breath of the Wild. It serves as a good bookend to her cover of the Littleroot Town theme from 2014 since it’s also a collaboration piece which only uses the violin. There’s certainly a difference between the two pieces, evidence of how much Tera’s style changed over the course of three years. Around this period, Tera begins experimenting more with what videogames she draws inspiration from and her approaches to covers. “Ragnarok II Intro Theme Cover” is an extensively lyrical piece. One of her most interesting pieces from this time departs from the normal route of covering one piece. “K.K. Condor/Gate of Finis Mashup” actually combines covers of music from Animal Crossing and Octopath Traveler to create an entirely new but recognizable sound. Beyond those, though, the best thing to do to learn more about the style which has dominated Tera’s music over the past few years is to listen to it.

With that, you hopefully have enough of an idea of Tera Catallo’s music and how it has developed over the years that you want to listen to it, so take a look at those playlists from the past three years and click through her older pieces as they catch your eye!