From the Super Mario Wiki, the Mario encyclopedia
< The 'Shroom:Issue 122
Jump to navigationJump to search

Welcome back again to the Fake News!

Unfortunately, Mr Squid (talk) has retired from writing the Travel Guide. We wish him luck for the future.

I don't have much time this month due to exams - as do quite a few of our writers - so I've had to keep this brief.

Mario's been at it again.
[read more]
The community is pretty shook up after King Bob-omb's death.
[read more]
Quizmelon tells us what to watch on the telly.
[read more]

Greetings, 'Shroom readers. This is Lord Bowser here with a new edition of Police Blotter for you all!

I have a very special announcement to make. As you may have seen in last month's edition of Monthly Inquisition, I was reunited with my long-lost brother, Blue Bowser, in an emotional interview. In an attempt to bond some more with him, I am pleased to say that he has joined in as my lackey for Police Blotter from this point forward! He will be replacing TPG, who was permanently banished to Sticker Star at his request. I think. 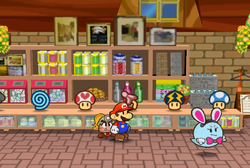 Just look at that smug look on Peeka's face... almost makes me want to kill her again. How dare she trick her shop-goers like that!

Anywho, now that that's out of the way, it's time to get to the case. After hearing the emotional testimony my brother provided regarding his stay at Rogueport, I decided to head over there myself and bring the Pianta Syndicate to justice. We left my castle and took a sailboat to Rogueport, with the intent to arrest all of the members of the syndicate. To avoid ourselves being detected and recognized by the syndicate, we put on very cunning disguises; I dressed up as a fat plumber, and my brother dressed as a Goomba girl. It was a totally foolproof plan! No one ever suspected us.

My brother mentioned that their front was a popular shop located on the west side of Rogueport, named... Westside Goods. They had a secret test that involved buying a Dried Shroom, a Dizzy Dial, and answering "yellow" as their favorite color. I arrived promptly to the shop and followed Blue Bowser's instructions. This was able to convince their shopkeeper, Peeka, into letting me into a hidden part of the shop, telling me that I was cleared to speak with the boss. Before that, however, Blue Bowser was able to snap a picture of the shop, showing all its hidden secrets. It's really quite disturbing to know that this gang would stoop to the level of fooling innocent consumers in order to provide a front... despicable.

Don Pianta's reaction to my questioning over his actions. You can just see him quivering under that blank expression!

As we entered the main office of the syndicate, we were immediately approached by the boss's cronies, who referred to themselves as Tony and Vinny. They recognized Blue Bowser and threatened to beat him again, but I was able to make them fall back by punching their faces in. Afterwards, the boss, Don Pianta, came around and asked us what we were doing there, and I responded by saying that we were there to hold them responsible for their disgusting actions. He replied seemingly bewildered and offended at my accusations, though we both knew he knew exactly what we were referring to. Blue Bowser even went and showed him the scars he had left on him from his tussles with the syndicate, and that's when the Don finally fessed up to the crimes. However, he mentioned that he was too powerful to simply be locked up in jail, though I begged to differ...

I went up to him and socked him right in the face, breaking his Pinocchio nose and wilting that annoying tree on his head. Blue Bowser went after Vinny and Tony, tackling them and putting them in cuffs while restraining their kicking. The Don and I really went at it, him trying to chokehold me and even throwing chairs like a coward instead of using his fists like a man. After a series of brutal clawswipes, the Don finally cried uncle and settled on the floor, covered in bruises and clawmarks. I was pretty beaten up as well, but I stood victorious.

Not only is this another atrocious display of tricking innocent customers, the level of narcissism here is beyond words. Disgusting.

After our intense fight, the Don and his cronies finally surrendered, and we were able to arrest them together. We also cornered Peeka and questioned her, and she admitted that the syndicate had another front; the Pianta Parlor, dedicated to casino-type games. Inside, we cleared out the area and also arrested Peeka's sister, Lahla. We finally rounded up all of the members of the syndicate, and we held them on our boat, planning to charge them with organized crime, theft, assault, possession of illegal substances, and overall being dicks. However, before we set off for Rogueport, my brother asked me for a quick visit to the Robbo Gang, in order to be able to catch up. I let him go, and he was reunited with his old friends; Gus, Garf, Pierre, and their boss Ishnail. It was a tearful reunion, and they were all understanding of his reason to leave; Ishnail even offered him a place on the gang once more, though Blue Bowser turned it down in order to stay with me longer. They sent us all off with an enthusiastic and almost tearful goodbye, and then we set sail for my castle.

The boat ride was rather crowded, and the syndicate members were loud and repeatedly tried to jump ship, but we wouldn't let them escape so easily. Upon arriving, we immediately took them into my courthouse, and put them on trial for their vast list of crimes, with Blue Bowser serving as the prosecutor and victim. Afterwards, the jury got together to deliver their verdict, though I was immediately tired of waiting and pronounced them all guilty. I sentenced them all to 5 years of hard labor around my castle, serving as my butlers and construction workers. They all accepted the sentence begrudgingly, but Blue Bowser and I were satisfied that justice was finally served after so many years. Our first case together was a rousing success, and we were both happy that we got off to such a great start.

And that's it for this month's edition of Police Blotter. Thank you for reading, and be sure to tune in next month for a new edition of Monthly Inquisition! This is Lord Bowser, signing out!

When most fish die, they get flushed down the toilet, and sent to the ocean. However, when the fish in question already lives in the ocean, and is fairly big that tradition becomes slightly hard. Luckily for some, I have a rather large toilet, so we transported Bessie Bass to my humble abode, and flushed her. After all, it is tradition.

Oh yes, Bessie Bass died in the past month, and there have been massive repercussions because of this. The main one is I now own a large boat, and some guys are out of a job. I mean, come on, do I really need a bunch of people floating around in inner tubes?

The case of death was some like tyke kept shaking the bag that she was in. I would go into the details of why this caused Bessie Bass's death, but that would be too gory for a family publication. All you need to know is that shaking bags with fish in them are bad, especially if they're giant fish who could potentially eat dinosaurs.

Not many people were sad to see Bessie Bass die, it seems. Many of the guys floating around in the inner tubes gave comments criticizing her need for a battleship, considering that she was a fish and should have been fine in the ocean. Other fish seemed to try and distance themselves from her. Big Bertha said: "She tried to be one of us, but although she ate a lot of plumbers, we are too different. Accepting her would be like inviting the fishermen to fillet us."

Bessie Bass's funeral is yet to be held, but the event is scheduled for the 30 May. According to the wishes of Bessie Bass's family, she will not be cremated. Following the service, there will be a sushi bar.

It's that time again - you have successfully reached the TV Tomorrow column, bringing you all of the TV in the Mushroom Kingdom that's on tomorrow. And this month looks like a great month for TV, with plenty of brand new shows, with interesting premises and popular actors. So let's get straight into it - here's the top three shows to watch!

Peach and Toadsworth feature as themselves in the striking crime drama The Wrong Man, on MKBC2.
New: The Wrong Man


MKBC2, 10pm
Genre: Crime drama
Based on the true story of when Mario was falsely accused of spraying graffiti over Isle Delfino, this compelling crime drama reveals hidden truths behind the accusations and the people involved. Starring Mario as himself, naturally, the first episode tomorrow is a stunning piece of TV crime writing.

Contestant Tanooki Mario completes in the opening challenge, a difficult obstacle course, on The Pyramid, at 6.30pm tomorrow.
The Pyramid


The Party Channel, 6.30pm
Genre: Game show
The hit obstacle course/quiz show returns for its fourth series tomorrow. Four more contestants are invited to The Pyramid by Eyerok, and they must complete athletic and mental challenges to reach the top of the pyramid to claim Eyerok's Treasure. It's a gimmicky show, but it's excellent TV and well made.

Waluigi and Bowser are two of the strongest competitors looking to win the Super Cup in tomorrow's live Battle.
Renegade Roundup Super Cup


Kart Racing Live, 1.30pm
Genre: Sports
With the opening of several new Battle Courses this spring, everyone is excited for the first tournament to be played on them: the Renegade Roundup Super Cup. 12 eager contestants are ready to drive and battle their way to victory, and the first leg is over at the stellar Lunar Colony - not to be missed.

There are plenty of other shows to watch if you're not keen on this kind of stuff, but you'll have to check your local Mushroom Kingdom TV Guide for those. Or just flick through the channels. And I must issue a warning: next month we've promised to let Wario decide which TV programmes he wants to show. Next month you may want to turn off your TV and go outside for a change. But until then, go enjoy your month of TV!