From the Super Mario Wiki, the Mario encyclopedia
< The 'Shroom:Issue 107
Jump to navigationJump to search

Welcome back to the Fake News! I'm MCD, and I'm still here...unlike four of my writers :(

Yes, unfortunately, Banjonator1 (talk) has had to take a hiatus from Hot Records, but thankfully he'll be back in about a few months. And, of course, Hypnotoad (talk) has also left Dear Anton for now, but luckily MST3K (talk) and Ask '3K have returned!

Even more unfortunately, Marshal Dan Troop (talk) has retired from all of his 'Shroom sections (and the community), so Fightin' Footwear isn't fightin' anymore, which is a real shame because I really would've loved to have seen more editions of it.

On about the same level of unfortunateness, Palkia47 (talk) has been removed from the Sport Report due to his inactivity. But he'll always be welcome back to the section if he returns.

So, we're a little light on content this month. But you can fix that! Wondering how? Check out our FAQ:

Q: Why have you broken into my house?
A: Sign up for the Fake News!!!

So, if you want to sign up, just follow the application form on this page and send it to our Statistics Manager. Don't be afraid to ask him any questions; I'm sure he's used to that...

That was a really close battle, but congrats to Anton for winning section of the month! 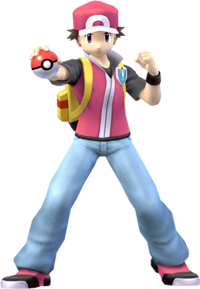 He definitely caught something...

Sad news... again, the Pokémon Trainer is dead. Which one, you ask? Well, the news reports I stole this story from didn't really go into that, so I'm just going to make some stuff up and hope that everything goes well, I'm sure it will.

Anyway, to try and bring you the most truthful of news stories I started tracking down potential candidates and after several phone calls I managed to deduce that the Trainer in question was not one whose Rattata was in the top percentage of Rattata. Nor, was it a trainer who despite owning the best Pikachu in the world has not won the Kanto League. So after concluding that it couldn't possibly be any of those people, I swiftly turned my attention to...

"Have you heard about my Ratt"

Anyway, as I was saying I swiftly turned my attention to the criminal organisations. Criminals always die, so I figured one of theirs had. Sadly though, all the organisations were too busy either looking fabulous, attempting to open up holes to parallel universes or failing to capture Pikachu to give me an answer.

Which left me with the professors. Surely one of them died, and after all they were once Pokémon trainers, but sadly there was a tree convention in some faraway place and so none of their offices were answering the phones.

All of these events forced me then to go to the funeral of this unnamed Trainer. Unfortunately for me, it was a closed casket ceremony and I kept getting stares of disapproval whenever I attempted to open it up to peek inside. So loyal readers I am going to go the extra step, in a few hours I will dig up his grave to find out who this person is!

Please note: Yoshi876 was later arrested and prosecuted for attempted grave robbery. He is currently sitting his one month sentence in Sudbury Prison.

For my first issue back doing this, I received a surprisingly high amount of questions and for that, I am grateful. However, to prevent this from running on for too long and so I have something to fall back on, I'm not answering all that were sent in, at least not now. I hope you all enjoy the new format while Anton takes a much needed rest.

You've done this before, yeah? I was wondering if you could run things while I'm away. That would be gr8!"

*There are several photos of Anton posing on a beach.

Well, the door's locked so I don't have much say in the matter. Oh well, it can't be that bad. Let's just see what's on people's minds...

What's it like to be hypnotized by Anton? Do you like it? Are you still hypnotized and currently taking orders?

You know that feeling you get when you stand up too fast and you feel like you're gonna pass out? Imagine that except you're also being controlled against your will and your awake for every bit of it. I don't care for it. Also Anton is the gr8est.

I'm in a bit of a conundrum here, really. You see, there are these pesky robots that keep showing up. They really don't know when to stop! I've asked them multiple times, but to no avail. What do I do?

Well, what are they doing, exactly? If they're not doing causing any physical harm and/or property damage, then just let them be. They'll rust out eventually. On the other hand, you might wanna look into investing in some kind of buster. Heck, I'd come help you right now, but I'm kinda stuck here.

Why is Roserade's stage in Pokemon Shuffle so ridiculous?

I've never played it but is there a Mienfoo/Mienshao stage? Because that's the best one if there is.

what are your fetishes

My fetish is being asked what my fetish is. Look what you've done.

Also what in blue blazes kind of section is Anton running here?

Well then. These were all addressed anonymously. I'll just fold these up into little paper airplanes and throw them out the window. Hopefully they find whoever they belong to...