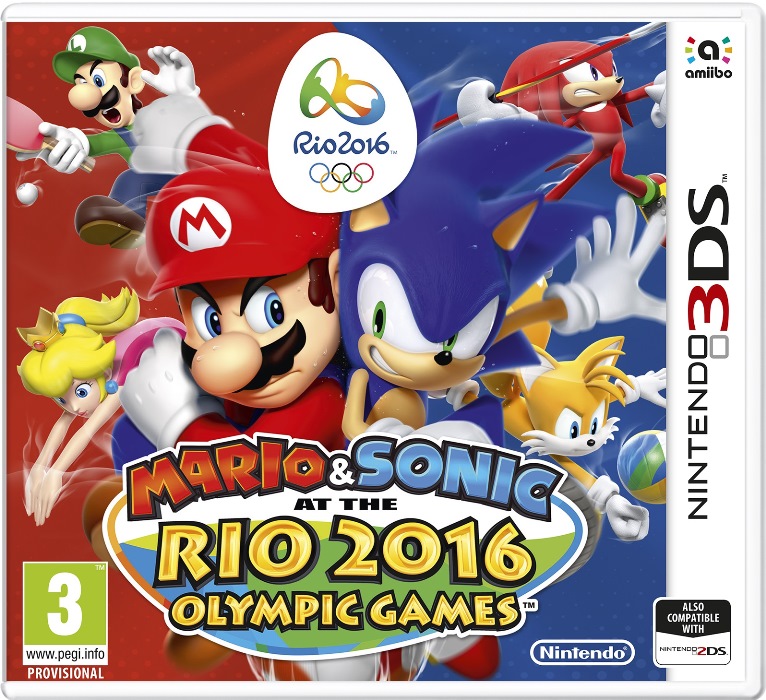 Hey can I add somewhere that this game has amiibo compatibility? Marioguy (talk) 17:34, 3 July 2015 (EDT) Marioguy

We don't know yet.

Ludwig and Wendy have been confirmed for the 3DS version at least. They appear to be playable characters and this may also point to Zazz being playable too. Link: http://nintendoeverything.com/mario-sonic-at-the-rio-2016-olympic-games-3ds-dated-for-japan-trailer/

Good call. I think it is safe to say that they are playable. Also, I see Dry Bones participating, could that mean he's playable too?

Possibly. It was during the cycling event, but I couldn't make out the fourth character.

UPDATE: I found an image. It's Wave The Swallow (One of the Babylon Rogues). Link :http://huntertsf.tumblr.com/post/133095161633/while-all-you-losers-are-all-out-here-losing-your

Shouldnt this info also be added to the Wii u version of the game? i cant see the characters beeing different in each version.

Order of the characters[edit]

Since an edit war is actually happening, let's try to recapitulate where the problem lies. At the moment, there are two conflicting criteria in term of listing the playable characters:

What order should we follow? And why? Are there other examples or guidelines that we could follow? I think it would be nice to finally clarify these points.--Mister Wu (talk) 23:33, 23 March 2016 (EDT)

I don't seem to recall we've ever put the official order for other Mario & Sonic games (even taking into consideration the other's alternate between a Mario character and a Sonic character), so I don't see what a deviation would do. And besides, it just looks so awkward with Birdo sticking there like a sore thumb. That is just a personal thought, mind, but consider that Sonic's side has all its veterans and all its newcomers together. CrashBash (talk) 03:30, 24 March 2016 (EDT)

The official roster without unlockable characters can be seen here, I'll try to see if I find the full roster, but it might take me some days. Anyway we can already see that Birdo is placed among the veterans even if she is a newcomer.--Mister Wu (talk) 15:18, 24 March 2016 (EDT)

I've looked at the orders for previous Mario & Sonic games. Neither of the first two installments actually follow the in-game order; Peach is separated from Waluigi, for example, despite both being Skill-type.
I also just realised that the in-game roster order actually makes no sense. It moves right to left starting from Birdo, but then why is Waluigi in front of Wario? Especially if these two were swapped, they could be above their respective rivals. Moving from left to right (and assuming Ludwig could be locked), Bowser Jr. still sits in front of Bowser, again, an oddity. I personally believe the characters should not be ordered by the in-game order. MarioComix (talk) 20:01, 24 March 2016 (EDT)

Been checking through a few game articles and they've always listed the characters the way they were in the game itself. Default and Unlockable characters are usually in separate sections and still go by the order they appear on the game's roster. Whether or not the character is a veteran or newcomer doesn't affect the order.

Character stats for this version[edit]

I personally own the Wii U version, so I could easily take screenshots with 1280 x 720 resolution (likely the actual rendering resolution of the game) and anlyze them. Fortunately, it turned out that all the main characters' stats had steps of 5 pixels, with 10 pixels between the center of one dot and the center of the next. So it was easy to obtain them by counting the dots. This is less straightforward with the 3DS version, as it appears that there are many more intermediate values and the videos likely aren't at native resolution. Since I'm going on vacation for nearly a week on Saturday I don't think I will be able to extract all the stats before the next two weeks. For now, here's a video with all the stats, if someone wants to start adding them.--Mister Wu (talk) 14:38, 21 July 2016 (EDT)

I did a quick check with Dry Bowser (since his costume, when found in the chest, shows the full stats in the game's format) and, as I feared, the stats range from 0 to 10 with steps of 0.1 and compression and upscaling artefacts do not allow to estimate the intermediate values correctly. If you want the stats, a reliable method would be taking png screenshots of the character select screens at native resolution, for example using the 3DS capture cards. If someone who has the game can take the screenshots, I would be able to analyze them and extract the stats for the characters. An alternative method would be recording all the screens shown after costumes are found in chests, as they show the stats also as numbers, but I fear not all costumes can be found in chests.--Mister Wu (talk) 16:33, 2 August 2016 (EDT)