I don't know if you guys noticed this, but the "official" name for Captain Olimar is Pikmin & Olimar. They're not separate characters (we know because Sakurai writes that Olimar is useless without them), but we have separate articles. I think this would be okay if we had an article for Nana and another for Popo, but we don't; we just have one for Ice Climbers. So... merge? Stumpers! 22:01, 9 January 2008 (EST)

I think we should stick to one article for now and consider splitting them later when new info comes in.Knife (talk) 22:10, 9 January 2008 (EST)

Well, the Ice Climbers are incredibly similar to each other, while Captain O. is next to nothing like the Pikmin. Also, if you check the DOJO!! today, Sakurai does indeed refer to the captain as "Captain Olimar", so we can call him this. NMRodo

Sounds good to me. Especially now that we know that there are five different Pikmin, it is definitely worthy of its own article (just don't make an article for every Pikmin color). One thing though: we should remove SSBB template on the Pikmin page since they aren't the ones who are actually fighting with movesets (and they also don't have a unique entrance I assume).Knife (talk) 18:58, 11 January 2008 (EST)

Sounds perfect. And then, if in the final version of Smash Bros. the fighter is called Pikmin & Olimar, we can move this page how 'bout? Or a redirect to this page from there? Btw, I didn't know there would be such a difference in Pikmin until today, so... oops. We have an article for Vegetable, so really... consistency says we should keep Pikmin. Yay! Stumpers! 21:34, 11 January 2008 (EST)

All right, guys, here's my idea: With the exception of Mario characters, every character in Melee gets the name of their trophy (i.e. Zelda, not Princess Zelda), so if Captain Olimar and the Pikmin get seperate trophies, how about they stay split? NMRodo

I say they should be merged, because they are Olimar & Pikmin

I am Zero! Does any of you know how to move Olimar's ship left or right when he comes down, from his final smash (the controls are the nunchuk attachment). Zero signing out. Zero777 (talk)

I'm pretty sure you can't. I have the game as well and , believe me, I've tried. -Doopliss rocks

I am Zero! I asked because a long time ago I saw a computer move the ship left or right. Zero signing out. Zero777 (talk)

The only time i remember olimar in luigis mansion was the trailer for pikmin found in the game. --LuigiBros64

Watch the video in settings, a whole appearance than cameo. SWFlash

Where in the SSB series has it ever been disclosed that he's married? I'm referring to the Married category on the page.--Knife (talk) 20:22, 5 February 2010 (EST)

Makes since, by the fact that he has two children and that he had a wife in the Pikmin games. Baby

But that wasn't in a Mario game, so it isn't relevant. Hello, I'm Time Turner.

Actually it is relevant, I think. If we take it out, you're taking out TRUE and VALID information.--FREAK ~Game

Perhaps we need to remove that part since it is in direct violation of the coverage policy. It doesn't matter if the information is true, we need to set a limit somewhere.--Knife (talk) 23:14, 5 February 2010 (EST)

I think the picture should change to 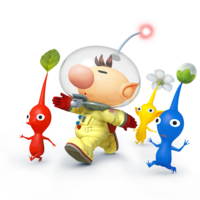 Instead of his Brawl artwork. (This picture is for the upcoming SSB game) Goombob

We'll change it when the game is released. Yoshi876 (talk)

Shouldn't we mention the upcoming game on here anyway?

At the moment, there isn't a lot of detail, I know the other characters who are returning don't have anything on them, because we don't know enough about the game to put information on, we know some vague attacks, but they could be removed. Yoshi876 (talk)