It has been decided that the Super Mario Wiki will no longer support this feature. This page is kept and protected strictly for historical purposes. 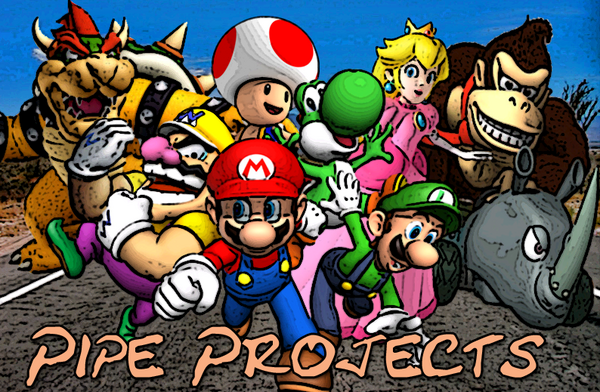 Super Mario Wiki's PipeProjects are similar to Wikipedia's WikiProjects. Therefore, Wikipedia's standards for WikiProjects are roughly equivalent to ours (except that ours are almost all Mario-related) and external links to those guidelines are included on this page for help.

A PipeProject is a portal for a major project that often branches out into multiple articles. With the Super Mario Wiki growing day by day and upcoming Mario games, articles about and relating to those games could use some organization to be completed, hence PipeProjects. When creating PipeProjects, using Template:PipeProject to start out with is straightforward.

Luigi's Mansion, including the article, its talk page, and its two side articles, ghosts and rooms, was the first project to be worked on and inspired the idea behind PipeProjects. As a total of 99 articles were being created (49 ghosts, 49 rooms, and 1 main article), the talk page became cluttered, and ideas on how to create some of the ghosts and rooms' pages were split between the template talk pages and the main talk page, thus making it hard to spread pertinent messages and inspirations throughout the people working on the expansive article. PipeProjects are meant to keep everything related to a project like such on a single page, with its talk page acting as a forum and organizer of the project. It took 25 days to create all 99 articles for Luigi's Mansion, and collaborative PipeProjects are meant to cut that time at least in half on any future undertakings of similar size.

See PipeProjects' own talk page for more details on the origin from one of Super Mario Wiki's contributors.

Before creating a PipeProject, be sure that it will involve more than one article, since you can communciate with other members on a single article's talk page instead. Please see Wikipedia's guidelines for more details.

For more on how to create and lead a PipeProject, refer to Wikipedia's best practices for WikiProjects.

Contents of the Portal

On the main page the following is included, but not limited to: