From the Super Mario Wiki, the Mario encyclopedia
< MarioWiki:BJAODN‎ | DK Wiki
Jump to navigationJump to search

Mario (Japanese マリオ) serves dual roles as the hero of the Mushroom Kingdom and Nintendo's mascot. Mario was created by Shigeru Miyamoto in 1981, where he first appeared in the video game Donkey Kong in arcades. In this game, he was referred to as Jumpman.

After Nintendo lost the license to create a video game based on the Popeye universe, the game design was used to create Donkey Kong, but characters, including Mario, were designed to replace those belonging to the lost license.

Jumpman was renamed Mario when an employee at Nintendo of America's office in New York City pointed out the similar physical appearances of Mario and Nintendo's Italian landlord, Mario Segali. According to popular legend, this connection was made when an ill-tempered Segali burst in on a meeting to collect rent. The purpose of the meeting was to find a better name for Jumpman.

Mario is one of the most recognizable videogame characters of all time. He is best known for rescuing Princess Peach from Bowser along with his brother, Luigi, by using his many powers, among them his amazing jumping ability. Despite being enemies occasionally, they both have a hatred for Bowser.

Over the course of his many games, Mario has rescued a number of women(and men) from captivity (including Pauline, Princess Peach, Princess Daisy, as well as other people in distress such as Prince Pine.) and has become regarded as a great hero in the Mushroom Kingdom. There is no definitive time line for the events in the various games, most of which could be placed in nearly any order.

Mario is always seen as a kind-hearted and brave hero. He is willing to risk his life to save the lives of millions from a large amount of evil. However, he has been known to mistreat his 'pet', DK (which triggered the events of Donkey Kong) , and force him to work in circus.

Appearances In The DK Series[edit]

Mario's first appearance game-wise was in the original Donkey Kong. Donkey duels Mario's friend Pauline. Slinging Pauline across his back, DK ascended the metal girders of a construction site in Big Ape City on Donkey Kong Island. When Mario pursued, the ape began throwing barrels at him and rolling them down the structure. Mario jumped over and dodged the barrels and other hazards of the structure as he approached, trying to get Pauline back.

Chronologically, Mario first met Donkey Kong when they were both babies helping Yoshi (although this may have been Cranky Kong; see Controversy over original Donkey Kong. 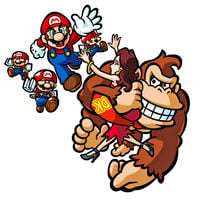 Mario and Donkey in March of the Minis

Mario has been chasing after DK in March of the Minis over the mini-Mario toys. Mario had to fight DK over them, and DK was the villian once again. Donkey Kong stole them out of a love for them, and he had for the sequil as well.

In lighter meetings, Mario and DK have competed or teamed up in sports games, racing, in the Mario Party series, and the Smash Bros. series.

Relationships with Other Characters[edit]

Mario and Cranky are sworn enemies, after the events of Donkey Kong (Mario going so far as to imprison him for it.)

Donkey Kong is Mario's old enemy from the Donkey Kong Jr. era, in which DK was just a kid. Despite Mario's old conflicts with DK's father, now known as Cranky Kong, he has developed a friendly and somewhat competitive rivalry with Donkey Kong as witnessed in the Mario vs. Donkey Kong series.

Mario and Diddy have a neutral relationship, competing in numerous sports together, but don't hesitate to beat each other up in SSBB.

Mini-Land Mayhem: Mario and DK's rivalry continues. When Donkey Kong steals Pauline form Mario he sends his minis to get her back. More info will be available after the realese.

Relationships with other characters:
Donkey Kong:
Donkey Kong is Mario's good friend. Mario was enemies with Cranky but became friends with his son. Their homes are on good terms as they have participated in sports and festivals. Donkey Kong has also done nice things to Mario and his friends in the Mario Party series as he gave them coins and stars and made the bananas in his minigames coins. However Mario and Donkey Kong had to fight in the Mario vs Donkey Kong series because Donkey Kong got angry and either stole mini Mario toys or kidnaped Pauline. However in the end Donkey Kong apoligized to his friend Mario, Mario forgave him, and they became good friends again

Characteristics:
Mario is always seen as a kind-hearted, pure of heart, extremely smart, and brave hero. He is willing to risk his life to save the lives of millions from a large amount of evil. He loves Luigi, Yoshi, and the rest of his friends and will always protect them. He is even a really good friend to Donkey Kong and his friends. Mario's favorite hobby is having adventures, being a hero, being kind, protecting others, and having fun with his friends.