Welcome to my talk page!

You are good to be here. :D

Yay you called me good :3

Hello. Just thought I'd tell you that the construction template is meant for mainspace articles and not userpages so can you please take it off. Yoshi876 (talk)

Nice to see you too.

Why no one is here? This happened with my two spinpastas: MaRIo Trois and SuPEr MaRIo World. ;(

Your signature needs to fit inside the above box (this also goes for the two themed ones). Another issue is the signatures are in violation of Rule 7 on signature policy. You are only allowed one animated image, or two static images in your signature. Your main one has an animated and a static one, so one of them needs to be removed. Your themed signatures have three static images and one animated one so some of them will also need to be removed. Yoshi876 (talk)

As per policy user subpages should generally serve the wiki, I'm afraid this doesn't so it will need to be deleted. Yoshi876 (talk)

Hi, MM. The new subpage that you created is unfortuantely in violation of our userspace policy, and will be deleted once an admin notices it. It you want to keep what's there, you'd need to place it on your main userpage. Otherwise, it's going to waste. Hello, I'm Time Turner.

OK, fine. I did what you said. Oh, and you have a typo on your message above this text: it's supposed to say "If" instead of "It" on the second-last sentence where you told me I needed to place the subpage on my main userpage. 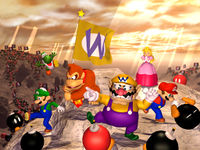 There were 2,996 (2,977 victims, 19 hijackers) deaths and over 6,000 non-fatal injuries. Quite big numbers, eh? The twin World Trade Center towers were crashed by two planes as well, resulting in collapse after two hours. The twin towers are currently being replaced by a new building called "One World Trade Center", which started construction on November 18, 2006 at the World Trade Center site and is set to open estimated 2014, by the time I was writing this.

To coincide with the 13th anniversary of September 11, 2001, I temporarily changed my signature for one day. Thanks for reading,

You have been editing userspace too much lately, and your userspace editing makes up over 50% of your edits. Please try to edit more actual articles here. Thank you. River Piranha (talk) 14:04, 8 October 2014 (EDT)

Hi there! Are you a newer user? I am sorry that I'm not active a lot, but sure, we can be friends!

Um, I think I joined sometime during late 2013, but maybe I should agree with you :D

Yes, actually. I've been far too busy with various other things to remember something as simple as that, especially since the Statements are quite frankly the least important part of the issue. I'll try to get it up soon, but no promises. Superchao (talk) 15:43, 29 October 2014 (EDT)

OK, thanks for the feedback! :D

It'd probably be more convenient if you posted your work on a site that's better-suited for fan works, like the Super Mario Fanon. I don't have much experience with the site myself, but it would certainly allow your NAB thing. Hello, I'm Time Turner.

Yeah sure, but just gonna say I don't talk much and I'm not usually online for very long, but I'll still give you my userbox if you want it. |-

As seen here you aren't allowed a fictional shop on your userpage so that will need to be removed, also you are only allowed to have six YouTube videos embedded on the page and you have seven, so please turn one of them into a standard YouTube link. Yoshi876 (talk)

Re: not proud of you[edit]

Good. Good. Good. And don't do that to my picture again. If you keep my picture just like it was before you touched it, I won't be mad anymore.

srry i cant fix it

... >:( IMMA BLOCK YOU! FOR RUINING MY PICTURE! NOW ALL I HAVE TO DO IS DELETE IT AND UPLOAD THE SAME PICTURE AGAIN!!! (goes to sign up for admin)

Regardless of what happens between you and another user, threatening to block them by abusing admin power (not once, but twice) is completely unacceptable. It's understandable that you might be peeved due to Theguyonnookipedia's actions, but it is extremely important that you settle these matters cordially. It would have been best if you left a simple message explaining that you don't like what he's done and politely asking him not to do that. What you did was not polite in the slightest. If you continue to speak to that user or any other user in such a manner, expect further warnings and potentially a block.
The preceding unsigned comment was added by Time Turner (talk).

Re: not proud of you[edit]

the last edit you made (y'know, on that talk page) about how you were looking forward to the game i had to revert because it is forum talk. talk pages are for how to improve articles, not share your opinion on the game its about. be sure to refrain from that in the future. thanks!

Ohh, right. I just forgot. I'll do my best to do forum talk on the Mario Boards next time.

It's a ludovico technique thing, albeit used incorrectly but lol. It's a brainwashing thingie. - Hypnotoad (T|C)

I'll be sure to answer those in my next issue, which will be June because I'm not going bi-monthly. Thanks! - Hypnotoad (T|C)

Hi! Thanks for the requests, they won't make it into next issue, as that is going to be Wario themed. Also, typically we only have one of each improvement tag featured for the issue, however, I will do my best to make sure that these articles are all highlighted in future editions of Spotlight. Yoshi876 (talk)