This is an archive of past discussion. Please do not alter it in any way.

Wow, you're the best! Check out the blargg page that I edited. I added the 16-bit sprite from Super Mario World. User:Rocket88

Hey, thanks for the help, but I can't seem to find a straight up/down line, the best I could get was / , and that didn't work out so well. User:Rocket88

RE: Revert on the Peach Article (Mario Power Tennis stuff)

In regards to that, way ahead of ya, man. ;) The taunts from Peach in the game still don't need a mention, but I did clarify further about her involvement in the trophy ceremonies (under the Mario Power Tennis section of her article)... including the case of when Peach herself wins singles tournaments. --M. C. - "Mario Gals" Fan! User Page | Talk Page 00:36, 27 September 2009 (EDT)

You are good man!

Thanks for improving my Puff article.
The preceding unsigned comment was added by Kukukeke (talk).

Why are you adding enemy categories to everything. Not all Thwomps are enemies. For example, Ms. Thwomp is an ally.--Knife (talk) 00:36, 5 October 2009 (EDT)

Look at that page you just linked to me. Do you see any categories? Because only mainspace articles are included in it.--Knife (talk) 01:46, 10 October 2009 (EDT)

It seems I was wrong. I had no idea we were going for categorized categories. It bothers me that it isn't completely accurate, but I'm not going to undo every single category.--Knife (talk) 01:55, 10 October 2009 (EDT)

Okay, here are some facts:

Hey dude how are you. I wanted to ask if you wanted to be freinds do you?

Thanks if you want to add my box just pick one from my talk page. If you have a talk box I'll add it to my user page box tower.

The King Boo article was protected some moments ago to end a massive attack of a troll. I think it will stay protected for a while now, until the article is safe again. -

Thanks :) Yeah, I remember that day very well. You had asked me to move articles and help you with confirming your email, right? I am definitely glad I did. I am rushing right now, got to go to school now. Talk to you later. · SMB (Talk) · 07:11, 6 October 2009 (EDT)

How will your proposal help this wiki with NA rule. Give me a very good reason that will make me switch me vote. That's all I am doing. I would support you, but you got to tell me why it would be good without that information. Baby Mario Bloops

I know this is really late to say but even though I uploaded the baby rosalina pic. I made it for Monteyaga. Can you make that pic Monteyaga's personal image. 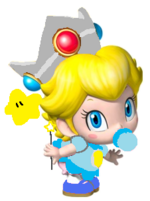 Ha-ha-ha! That's twice now for me! I don't know why everyone keeps on thinking I'm mad at them. No, I read your proposal wrong, so that is why switched it. I told you that because I thought you would be happy (that's why I wrote "happy now?"). Unless I capitalize all the letters in my message, I'm not mad!!! Baby

Calm down, calm down. If I just marked them for deletion someone else would get angry. I will mark them for review with Template:delete-request if you would like me to. BLOC PARTIER. 17:41, 11 October 2009 (EDT)

YOU CAN ETHIER PLAY AS A REGISTERED PERSON OR GUEST!!!!

Sorry, I'll be sick for a while :( I didn't think that {{Vacation}} was merited because I'll only be away for about three or two days and I may be able to squeeze in an hour of editing per day. Marioguy1 (talk)

Hi how are you?

Hi. Some days ago, I removed the "delete" tag from your FA nomination. Only some minutes ago, I realized you were the original nominator >.< Sorry for removing that tag instead of deleting the nomination. Next time, better put something more explanatory in the edit summary, thanks! Time Questions 12:18, 30 October 2009 (EDT)

This is probably a bit late, but my answer is that they are unnecessary. We already have the official artwork for nearly all of the monsters I removed the images for. Also, the animation was subpar, to say the least. BLOC PARTIER.

Hi there, Marioguy1; just snagged the time to respond -- as for said quote, even though said proposal passed, I'd still would take the quote down because it's still generic in nature -- anyone could have said the same thing that Cream said if you're referring to MSOWG. It's best to post quotes that would represent Cream best in terms of her character - and sadly, both installments of MSOG/MSOWG fail to match that criteria. Sorry. --M. C. - "Mario Gals" Fan! User Page | Talk Page 00:54, 5 November 2009 (EST)

I'm a bit confused, are you referring to a separate page of quotes from MSOG/MSOWG categorized by the characters in the game? Because that would be acceptable. The only drawback is that the quotes from "Team Mario" wouldn't be included, since they were "borrowed" from previous Mario installments. --M. C. - "Mario Gals" Fan! User Page | Talk Page 01:08, 5 November 2009 (EST)

Sorry (i'm spanish so it's posible than i write this message wrong) i'm new here so i didn't know the wiki, wll i'm very sorry about my errors, i'm not going to repeate it again.

Thanks for your information, you need to be the member of the month!!!!!