From the Super Mario Wiki, the Mario encyclopedia
< The 'Shroom:Issue XXXVII
Jump to navigationJump to search

Hey guys, SMB again. I had fun directing both the Pipe Plaza and Fake News this month; quite a change! Anyway, here's MG1.

Hey there everyone!!!! This is MG1, co-director of the Pipe Plaza! Sorry I haven't been able to write these notes...or do much co-directing for the last few issues but now I'll try to direct though you won't see me around much on the wiki anymore...

Anyhow, I'd like to thank SMB who covered all the directing for me when I was busy and couldn't do it and I'd just like to conclude by noting that there are many positions open in the Pipe Plaza sign-up page which you can sign up for if you just contact me or SMB so we can ask you a few simple questions.

Well, MG1 here to show everyone the fun world of Featured!!!

It seems that I missed last issue's Featured and, ordinarily, I'd make a special double-size section but, unfortunately, I'm on a deadline and if I don't get my sections in I'm gonna die.

Well, here are the featured articles that passed in the last month:

In the unfeatured department we have...Yoshi! See the Nomination.

list of shops in Super Mario RPG: Legend of the Seven Stars is also nominated to be unfeatured, vote here.

That's all for FAs but for FIs let's see what's in store...

Well, that's all the FIs...and FAs...well, it's time to say goodbye to Featured and say hello to...whatever comes after!!! Bye Cheesy

Hello readers, I am your handsome and modest writer, Tucayo! Welcome to the April edition of the one and only NIWA news! This was a relatively calm month, because most of what has happened was just talking, but anyway, I got enough stuff to make a decent section. Here is the news:

There is currently a discussion about whether we should include both versions of the “Hoshi no Kābī/Kirby: Right Back at Ya!” anime (Japanese and American edition, respectively), if we should give priority to either one, and etc. There are some differences between the two apart from the obvious language difference. Some scenes were removed from the American one because they made references to alcohol, guns, etc. Names were also changed and some dialog was changed. There is also the problem of whether we should use the Japanese or English name. I will keep you up to date with anything that happens.


Some days ago we received a response from Smash Wikia addressing a subject we had been talking about. As you may have heard, we staff were working on getting a Smash Wiki done, but then we realized that it may be better to get Smash Wikia out of Wikia so they can join NIWA.
A Smash Wikia crat, Shadowcrest, made this post in the NIWA forums a few days ago. Check it to see his whole response. He talks about the move from Wikia to NIWA and the problems he might find with the userbase. I will keep you informed about everything that happens with these and other matters. Stay tuned!

Tip of the Month (FunkyK38) 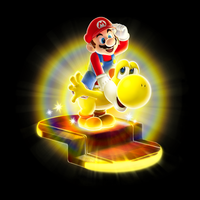 So here we are, another new issue of the 'Shroom, and another new Upcoming Games. Still the only upcoming game is Super Mario Galaxy 2, which has finally been getting new information.

First off, a notable element is the lack of a hub world, like the Comet Observatory. Instead, you progress through levels in a side scrolling manner, like you'd see in Super Mario Bros. 3 or New Super Mario Bros. Wii. That Mario-shaped planet, Starship Mario, seen in the previous issue will act like a pseudo hub, and get items, and choose galaxies, as well as interact with various non-playable characters on the small planetoid. Because of the lack of the Observatory, it is unknown if Rosalina will make a return appearance.

Another new element is the Rock Mario form. After the use of a Rock Mushroom, Mario will roll up into a boulder, and can roll around and jump, damaging enemies and crystals, although control is lost in this form. In Boulder Bowl Galaxy, for example, Mario must use this form to fight an armadillo-like boss, Rollodillo. The final new element to be chronicled this issue is the Bulb Berry, an item used no on Mario, but Yoshi. After being used, Yoshi will be covered in light, and light up hidden paths, although it comes at a time limit.

At that note, I hope you enjoyed this Super Mario Galaxy 2 feature, and that's it for Upcoming Games.