From the Super Mario Wiki, the Mario encyclopedia
< The 'Shroom:Issue XXXVII
Jump to navigationJump to search

Hello readers, I am your cool sub-director Tucayo. Welcome to this issue’s Sub-Director Notes.
Hmm… this month I don’t have much to say… Edo is now Fake Games writer, and his section is amazing! 22’s notes are also cool. If you want to write for The ’Shroom, please click the “SIGN UP” link in the shroomfooter (the cool thingy at the bottom of the page), and if you want to send us a question, comment, suggestion, complaint, etc, click the “CONTACT US” link. Smiley
I also have two great ideas for The ’Shroom, but they are top secret at the moment. Actually, they are so secret that only I know them…. but I will share them with the Core Staff soon Smiley
If you are bored, you can try to solve this philosophical question: What came first, the Shell or the Koopa? Think about it. For homework. A 345,096,706 page thesis about it. For tomorrow. It will be your final grade. That’s all I have to say. BYE!

I discovered the answer to the greatest mystery of the Mario series. To wit: Why doesn't Peach ever get better guards?

I was pondering this mystery yesterday. However, I wasn't making any progress, so I did the obvious thing and ordered plane tickets to Tibet.

In Tibet, I located a likely (unlocked) looking building, and walked in. I discovered that I had come into a Buddhist Monastery. After performing the customary ritual of introduction for American tourists (talking loudly in English, taking photographs without permission, and breaking things), I stopped some guy who was passing in the hallway, and asked him my question. For some reason, he kept trying to get past me, so I hit him on the head with a conveniently placed Ming Vase. After that, he was much more cooperative, but unfortunately, he didn't know the answer to my question. However, he was kind enough to tell me that the Buddha would know about it. He even pointed me towards the mountain that the Buddha lived on.

And so, after climbing a mountain in Tibet to ask the Buddha my question, I found out that the Buddha had been dead for about 1.5 thousand years. Oops! 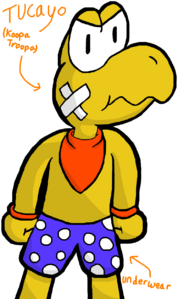 After I took this, I heard him mutter something about getting me fired, but I'm pretty sure that as long as I make a timely donation to the Stooben-Rooben-Gets-His-Own-Record-Label Fund, I'll be fine.

The real reason is that if Peach had better guards, Mario would never get any underwear.

See, Mario needs underwear. He used to live on Earth (we think), where most everyone wears underwear. Chances are good that he picked up the custom.

The solution? Well, Koopas do wear underwear. This is well documented, but if you don't believe me, I have this image of fellow 'Shroom administrator Tucayo to demonstrate.

So every time Bowser kidnaps Peach (so he can sing to her), Mario sneaks into the Bowser's Castle Laundry Room®, and takes some of the underwear he finds there.

And this is the real driving force behind the entirety of the Mario series.