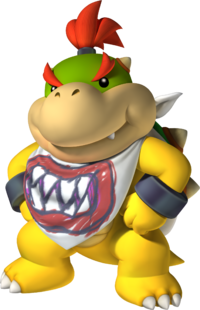 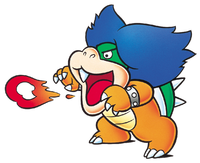 Welcome to another special comparison of mine! This comparison is based on the awards about best koopaling. Both koopalings are second-in-command of the Koopa Troop, they are favorites of Bowser but what's so different about them? Find out in this comparison!

Bowser Jr. wears a bandanna with a fist on it, has a hair on his head, a shell and arm waists.

Ludwig has huge blue hair on his head, arm waists and a shell.

Bowser Jr. is an energetic troublemaker who wants to be like his dad. He loves scribbling, stealing, and he is a spoiled child.

Ludwig is a cruel child who loves music. He also likes composing music, horror and even inventing.

Bowser Jr. made his first appearance in Super Mario Sunshine for the Nintendo GameCube. He disguised himself as Shadow Mario with the Magic Paintbrush to frame Mario, just to give himself time to kidnap Princess Peach. Later, he reveals his true identity to Mario and runs off to Corona Mountain where he and Bowser battled the plumber. After that, Bowser Jr. and his father started plotting their next plan to kidnap Peach.

Ludwig made his first appearance in Super Mario Bros. 3 for the NES. He took over Pipe Land and turned the king into a Piranha Plant or a Yoshi. Later, Mario battles Ludwig and defeats him, ending his reign.

Bowser Jr. can throw shells and slide around in his own. He can also transform into Shadow Mario with the Magic Paintbrush.

Ludwig can blow fire and slide around inside his shell. In addition, he can teleport, make earthquakes and he can shoot lightning out of his arms.

We are done this special comparison between two brothers! I have had a really good time with this comparison and I hope you did too! So who is the best koopaling? Click "Show" for the answer!

BOWSER JR.- The winner is Bowser's favorite son and heir to the Koopa throne, Bowser Jr.! Why? Because he went on more missions with his dad then Ludwig, he is a criminal and he wants to do nothing but defeat Mario. Congratulations, Bowser Jr.! You are the Character of the Month and the best koopaling!