Well well well, the same month we feature a special anniversary issue is thew same month of my 12th issue!

This month, I'm being brutally forced going to look at:
Yoshi's Island DS 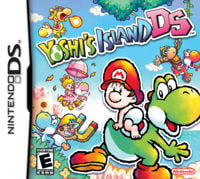 Now, I've never played this game, so pardon me if I'm a bit confused:

I can see why Baby Wario is pretty much the least favorite baby.

1. Graphics for Baby Wario and Baby Bowser can be found. In addition, two additional title screens can be found. They don't move around, and they use the old "Yoshi's Island 2" logo.
2. An early screenshot show's Big Guy the Stilted without the patches, which suggests he wasn't going the be robotic. 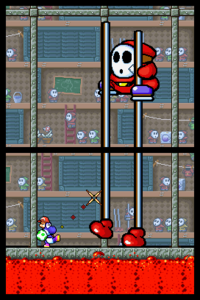 Notice the small patch over his right leg. Unfinished sprite, anyone?

3. The game scrapped the planned Wi-Fi capabilities early on. Usage of a ROM suggests there may have been a level editor of sorts, however, it is filled with useless graphical data.
4. A screenshot shows Baby Peach riding a Black Yoshi through a flower-filled area. Baby Peach's voice was also planned to sound a bit more adult-like.
Ha, there's a lot this game took out. Here's how I see 'em:
1. I had to do a bit of research on this one, and I've concluded that they were cut because both Baby Wario and Baby Bowser are only playable for a limited time in the game. Because of this, they can't have their coins scattered across every world. As for the title screens, both were probably just scrapped designs of the island, as they bear the old logo. Otherwise, they aren't really of major importance. 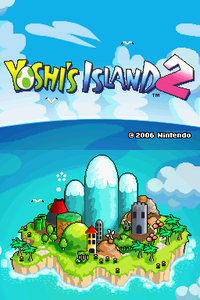 2. Yep, I can see that happening. However, there probably wouldn't be a difference in the battle, but a difference in the character design. It is very possible that the sprite is unfinished, and the screenshot it just to test that the boss actually works. This is backed up because the giant Stilt Guy has a single patch over his right foot. But as I said, I can see that a giant, living version of a Stilt Guy is just as reasonable as a robitic version of it in the Mario universe.
3. Wi-Fi capabilities, eh? Perhaps one feature of this could have been a battle system where two players duke it out in levels similar to Bandit houses in the original Yoshi's Island. Or just an egg throwing mayhem where you try to burst the opposition's baby bubble first... Nah, that'd be against the style of the game. But if a level editor was planned, then I guess you were intended to create a level, complete with puzzles and enemies, and send it for others to try out. Kind of like Stage Builder from SSBB, you know?
4. Nothing really special about these two. Perhaps there was a different order the Yoshis traveled in. Or maybe the level just wasn't seen in game. There's even the slight possibility that it was an customized stage using the level editor. Well, probably not. Baby Peach's voice is probably very annoying (I know it was in Mario & Luigi: Partners in Time), so I guess it was more adult-like to lessen the annoying qualities of it. Why it was changed, well, I don't know, maybe because she's a baby?

Well, happy 4th anniversary, Mario Wiki! I was told to use a game that faired well in the Mario Wiki Awards, so, here it is! This is also my 1 year anniversary for writing for The 'Shroom, I believe, and look at how far I've come! Ha well, I hoped you enjoy this section, and I really would appreciate feedback for this one in particular, since YI:DS is not a subject I'm educated about. So thanks for reading, and come back next month!