Welcome, Mario Karters, to Mario Kart: Wheel Tips Corner. Your friend Coincollector is here again to give you the Mario Kart tip of the month. 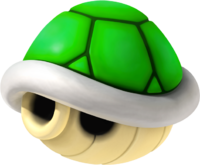 Throughout the history of Mario Kart, a wide variety of items have contributed to the uniqueness of the series and helped to shape what it is today. One of those items is the Green Shell.

The green shell is one of the classic staples of not only in the Mario Kart games, but in all Mario games in existence. It is a power‐up that when released, travels foreward in a straight line. If the shell hits a wall or any other surface, it will bounce off. It will travel around the track, bouncing off the walls. Eventually it will disappear after bouncing several times, or hitting any object or victim in its way.

You can gain a green shell if you’re in first or fourth place (in rare – and at the same time, untimely – occasions you may get one in fifth place as well).

OK, I’ve explained the basic behavior of the green shell. However, simply allowing the shell to travel in a straight line and hit a random target (which may be an object, an opponent, or even you) is not exactly practical, so I have these tips to make this item (a bit) more useful.

One of the best uses of the green shell is as a defensive weapon. It can be thrown backward to block effectively any incoming hazard (like the red shell) or to hit an opponent coming from behind.

I have another tip. Though it’s more advanced, it works very well sometimes. The green shell can successfully hit the opponent if they are located right in front of you, but what happens if the opponent is turning? Try to anticipate the move of your opponent when they swerve and throw the shell just before that moment. This can be harder to do, but surprising for your opponent if the move was done correctly. To do this it helps to understand drifting well. 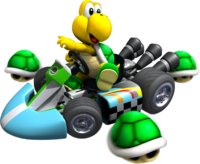 Three green shells to use at the same time… or should I say four counting Koopa’s shell?

In some Mario Kart games, you can also gain a triple pack of green shells. Just try to be imaginative about how to use this rare arsenal for either defensive or offensive purposes.

Green shells in battle are actually much less useful. Your opponents move everywhere, so it’s harder to aim at someone. The best way to use it is for defense, but don’t rely so much on this method since your opponents can attack you from any direction, not just behind.

I’ve got some other interesting things to note about the green shell. In Mario Kart: Double Dash!!, triple green (or red) shells are Koopa Troopa and Paratroopa’s special item (Petey Piranha and King Boo can get triple shells too). They obtain these items piled on their hands. Try to be careful while holding these shells as you can lose them if you are hit by another item in the road, leaving you with only a single shell to use.

In some games, the speed of a green shell also depends on the vehicles’ current speed when the shell is being thrown. That’s notable in Double Dash too, as the shell goes slower when shot backwards. Just try not to shoot that shell when going in reverse or you’ll see what I’m talking about!

That’s all for Mario Kart: Wheel Tips Corner this month. Heat up the engines for the special issue that comes next month and always remember, look both ways before crossing the street or else you won’t know who hit you with that green shell. See ya!