Hello 'Shroomers. SMB here. I need to thank everybody for making this team possible... Thanks to the initial Core Staff that approved of the idea, to the current and former leaders of this team, and to those who were good with sending in sections. I've enjoyed directing this team the two times I did, and it is an experience I will never forget. I am stepping up to Director of The 'Shroom, and as Paper Pikachu has been inactive for several months now... He will be removed from his position, and Fawfulfury65 will take over the team.

And that's about all I have to say. Once again, thanks to everybody.

For my picture of 2011, I decided to feature the mascot of the new year...er, two mascots. And who's better at representing the New Year's baby for the Marioverse than Baby Mario and Baby Luigi? They appear to be snowboarding, with Baby Mario enjoying this. As for Baby Luigi? Not too much. Actually, I was a little too careful and messed up his right eye (eraser Tongue). Sorry if this picture looks a bit too bright, or eye-soring (whatever that means). I tried my best to make this picture as pretty as I want it to be. It's not so bright if you see it in paper.

A character makes a cameo appearance in this picture. Can you find him?

Did you know, that originally, that this was drawn for my own pleasure and I was not originally get sent to the 'Shroom? I was about to submit a picture about me, "vandalizing" homework, due to my finals coming up this month? Then I had this brilliant idea. Why not send it to the 'Shroom? 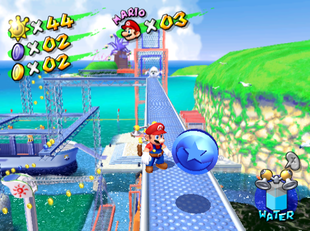 This month, it's this nostalgic 8-bit from Super Mario Bros. 3.

Who doesn't remember this game? The GBA remake was the second Mario game I got, and it was a good investment.