From the Super Mario Wiki, the Mario encyclopedia
< The 'Shroom:Issue XCVIII
Jump to navigationJump to search

Greetings, all! Welcome to this lovely May issue of Palette Swap! We have much for you to read this month! Adding to my colleagues’ notes about Issue C, please do consider giving us a suggestion on what to put in said issue! What better time to make your opinion heard than this monumental milestone for our paper? What else would you like to see in Palette Swap for Issue C? I can tell you, from what I’ve heard, great new things are headed your way with these suggestions! That’s enough out of me, I’ll leave you to the fantastic sections we have this month! ~FunkyK38 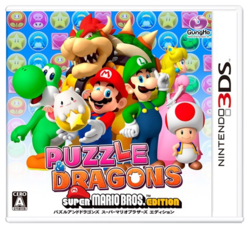 Top of the morning ‘Shroom readers! As I’m sure you’re aware a new game was released this month, so as per my tradition I shall take a gander at its boxart, the Japanese one in this case. As you may notice, there are seven characters featured on the boxart: Yoshi, Bowser, Princess Peach, Toad, Luigi, Mario, and the newest face in the series Tamadra (who probably won’t be along for long). The background also shows off all of the orbs, in Mario-form, that will be used throughout the game. For a crossover, this aspect isn’t really emphasized within the boxart, Tamadra could be confused for an actual Mario character so the boxart majorly fails to deliver on that part, which is a massive disappointment, and in my view a big opportunity has been missed there. It also seems to miss out on another important aspect: the recruitment of enemies and the like, none of these are featured on the actual boxart, I get leaving suspense for the player, but when something like that could be a major selling point it seems silly to just simply gloss over it.

Welcome again to Mario's Boombox. In this first non-Mario issue, we're gonna dive right into the deep end with one of the most fan-content-rich series ever: Touhou. For those of you who don't know, Touhou is a danmaku or "bullet hell" game, where basically the goal is to navigate the screen-filling waves of diverse, colourful projectiles being unleashed by your opponents, all the while blasting at them with your own hail of bullets. Here's an example of gameplay - against an unlockable post-game boss, mind you: it's not always that bullety and hellish, but you get the idea.

Of course, Touhou's gameplay is only a small part of the equation: it's real power is in its colourful cast of characters. With humans (magical or otherwise) rubbing shoulders with ghosts, gods, and both Japanese yōkai, from tengu to kappa, and Western-style mythological beings like fairies, mermaids and vampires, not only do you get your usual rainbow of anime hair and eye colours, but also a variety of horns, wings, tails, ears and fangs, all wrapped up in a riot of ribbons, frills, dresses, aprons, kimonos and more. And did I mention that from cute frog girls to elegant bookworm witches, pretty much every single character in the series is female? And the fans love them. Even one-off characters are guaranteed to have buckets of fan art, dōjinshi manga and lovingly crafted themes just for them. There are a few official spin-off print media and CDs in addition to the games, but for the most part, if it's Touhou-related, it's fan-made, and refreshingly, its creator, a one-man army who goes by the name of ZUN, appreciates and encourages the dōjin culture surrounding his project. Moe and music - Touhou in a nutshell.

Needless to say, there's far too much music associated with this series to cover in a single article, so instead, I'm just going to focus on what is arguably the most iconic and most remixed tune of Touhou: "U.N. Owen was her?" The original version of the song is in the video I linked to in the first paragraph - it's the theme of Flandre Scarlet, the extra boss of 2002's Embodiment of Scarlet Devil for Windows 98. It's the game that really launched the Touhou craze in full and continues to be a central pillar of the series - and one needs to look no further than the Internet presence of "U.N. Owen was her?" to understand that.

For some reason, this arrangement is pretty common on YouTube, although I prefer the piano remix of it. Other cool versions of the song include this plain "rock" one, a "techno rock" version, various electro or even "hardstyle" remixes, and whatever these are. Or, for something completely different, you can also check out some chill jazz versions, a Christmasy-sounding one or this ridiculously happy folk tune - where you really have to listen to carefully to confirm it is in fact "U.N. Owen was her?"

Live covers of "U.N. Owen was her?" include classical guitar, heavy metal electric guitar and accordion, and there's a variety of "orchestral" arrangements of the song to choose from. There's a few live piano performances, and all sorts of synthesia takes as well, from the basics to "Death Waltz" versions where the cascading notes themselves look like danmaku. Not counting amusingly weird but less-than-euphonic meme-based things (which I'm not getting into here), one of the quirkiest versions of the "U.N. Owen was her?" I've come across is made entirely of Windows XP noises. There's also 8-Bit and other misc. chiptune arrangements, and for a local connection, as it were, there's an entire Automatic Mario level dedicated to the tune.

And then there's the vocal stuff. And I don't mean acapella (although that does exist), but songs with full sets of fanmade lyrics. Poking around YouTube, I ran into "Sweets Time" periodically, wherein candy metaphors about killing and eating people fit the adorable vampire narrator perfectly. Another commonly-encountered arrangement is "Who Killed U.N. Owen?" - a more melancholy take on Flandere's story. There's also quite a few vocaloids floating around, from cover versions of things like "Sweets Time" to completely different sets of lyrics; this Hatsune Miku one is the best of the lot, imho.

But my favourite version of "U.N. Owen was her?" overall is "Beneath the Scarlet Moon, The Crazed Blossoms' Severance" by EastNewSound (the mouthful of a title notwithstanding). It's also the first version of the song I heard way back in 2010 thereabouts, courtesy of my ol' pal DP (although y'all know her as Dippy these days, the fearless leader of the Critic Corner section and one of the community's biggest music and Touhou buffs), so nostalgia plays a role here, but it's also a good tune - nice and driving and all about the bloodlust. EastNewSound also released a cool remix of it a year after its 2008 debut, and it's a pretty common backer for terrible English takes, direct translations or otherwise. If I ever find an English version of "U.N. Owen was her?" that doesn't make me cringe, I'll let you know, but for now, the YouTube link spam, and this article, is at an end.

If you somehow haven't had your fill of "U.N. Owen was her?", the Touhou wiki I've liked to a couple times lists a few more, and there's plenty of stuff that can be found on YouTube. I just tried to select a nice variety of the best/most interesting non-gag/meme ones: hopefully there's a couple in there that strike your fancy too. But if not, better luck next time, I guess!

It’s May, and we all know what that means- E3 is only a month away! Among other things. Anyway, I have for you all today a sprite from Mario & Luigi: Bowser's Inside Story, a Blizzard Midbus

! Hey, it’s even a gif! Where I live, it’s been a rather weird week for weather- we’ve had cold and rainy or hot and muggy all week long, and I likened it to this guy in the game- make up your mind, Midbus, are you hot pink or icy blue?