From the Super Mario Wiki, the Mario encyclopedia
< The 'Shroom:Issue XC
Jump to navigationJump to search

Welcome to another issue of The 'Shroom, Mario Kart: Wheel Tips Corner, the article that you must read and vote as your favourite if you want to improve your Mario Kart skills. I'll be taking a bit more of a retro approach now that Mario Kart 8 is out and nobody cares about it anymore. Except that Link is in, and so is Villager and Isabelle, now everybody cares about the game. I'll review a bit more Double Dash!! this time around, so grab a partner and hit the track!

The DK Jumbo is a default heavyweight kart in Mario Kart: Double Dash!!, and is Donkey Kong's kart. It's made of wood (how do the wooden wheels not burn?), meaning that it wouldn't last a lap around Bowser's Castle and that it is heavy. Wood is heavier than metal now. Deal with it. It is a rather fast kart, speeding at speeds that the game says it shouldn't, rivalling the speed of the Koopa King a kart with supposed unmatchable speed. Although, it's acceleration is one of the weakest in the game, meaning that you may want to stick to the Koopa King, seeing as it has better weight. But fear not, DK lovers! The DK Jumbo actually has better off-road than the Koopa King, so if you're up to exchanging a little weight to improve a stat that the kart isnt as great at, go ahead! 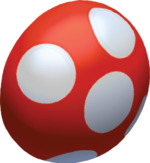 The Mushroom wheels are some rather tasty-looking wheels that appear in Mario Kart 7. They're as hard as they come, making them seem more like hard-boiled mushrooms from a failed cooking experiment. They seem to of been forgotten in Mario Kart 8, but the Slim set of wheels have similar statistics. They offer a little bit of a speed boost, but due to the decrease in acceleration, they seem to be less useful when compared to the Slick tires. However, the Mushroom tires offer a much better grip, allowing you to turn through corners easily. They have some pretty poor off-roading capabilities, which, while bad, is only half as much as what the Slick or Gold tires steal. All this results in a set of tires that are a great choice for speeders who want to safely be able to turn tight corners and not worry about landing off-road.

Dry Dry Desert is a course from Mario Kart: Double Dash!! (and Mario Kart 8. That game can't help sneaking onto everything I write here.) that, as the name suggests, takes place in a dessert. Make sure that after you drive over the chocolate volcano... Wait a minute. Obviously this course has sand in it, and driving over certain patches will slow your kart down, especially if it has bad off-road. (DK Jumbo not advised.) There are two different patches of sand, one of which hardly takes off much speed at all, meaning it that driving over it to cut corners isn't a bad idea when performed correctly. The other, however, should be avoided unless a mushroom is used. Even the best off-roaders will have trouble with this dark area. Going into the even darker sand results in Lakitu taking you back on track, so avoid that completely.

What do you mean you think I look better in pink?

So, a character from Double Dash!! that has since appeared in many games since, it's Toadette! Making her first appearance in a Mario Kart game, Toadette has become a fan favourite and has made multiple spin-off appearances. She set the standard look for all female high-pitched mushroom people and has had some design changes herself! mainly the dress changing from a red to, well, a lighter red known as pink for some reason. While not being the strongest character when it came to weight, Toadette was an unlockable, a presented us with a new item, a Golden Mushroom. She also had an unlockable kart that likely inspired the design of the standard karts in Mario Kart DS and later games. Overall, Toadette is truly a wonderful and creative addition to the Mario Kart and Mario series in all.

I've run out of fuel, so it's time I stopped at a petrol station for a month while you all read this. Enjoy this issue, and remember to grab a friend for the best possible Double Dash!! experience. See you next month, with new and less more exciting stuff!