Greetings, readers! So glad to have you here this month for Palette Swap! There’s not too much for me to say this month. We haven’t gotten any new applications recently, but do check out What’s On The Box? again this month! Enough talk, let’s get to the art! ~FunkyK38 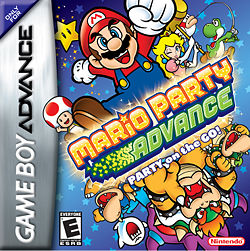 Hello readers, welcome to another edition of What’s on the Box? This month I have chosen the American boxart for ‘’Mario Party Advance’’. What’s that I hear you say? Why pick this boxart, the game was rubbish? Whilst that may be true, the boxart isn’t, in fact it is exploding with colours, which will catch the eye of a potential buyer. There are several characters featured on the boxart: Mario, Toad, Princess Peach, a Super Star, Yoshi, a Cheep Cheep, Bowser, two Koopa Kids and a Boo. The character placement for boxart is very good, as it places the heroes on one side and the villains on the other side showing a good old contrast of good and evil. However, what is strange in the boxart is that only Princess Peach and Yoshi seem to be doing any minigames, with the Princess carrying a hammer and Yoshi catching a Cheep Cheep with a fishing rod. Why would a party game not have its boxart focus on such a key feature? Who knows, but it is certainly a question that you can ponder on until the next edition of What’s on the Box?

Finally, after long winters for many, spring is upon us! Well, those of us in the Northern Hemisphere, that is. Anyways, to celebrate spring, and also Earth Day, which is coming up, have this sprite of a Sneed, from Mario & Luigi: Bowser’s Inside Story:

! If only all your seeds could just dance into the ground, then planting a garden wouldn’t be nearly as much work as it already is! Although, growing a plant with evil seeds might not be the best idea ever, unless you’re into evil seeds. Happy Spring, everybody!