From the Super Mario Wiki, the Mario encyclopedia
< The 'Shroom:Issue LXXXIX
Jump to navigationJump to search

Greetings, all! Nothing to say this month, it’s been pretty quiet around here. Do check out all the great sections we’ve got this month! 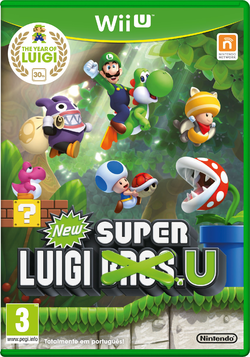 Hello readers, and welcome to another edition of What’s on the Box? This month’s edition is the Spanish and Portuguese boxart for New Super Luigi U.In the boxart you can see Luigi riding a Yoshi, Blue Toad, Yellow Toad, Nabbit, a Red Shell, a Piranha Plant and a Balloon Baby Yoshi. As the game was released as part of the Year of Luigi it has Luigi facing the player, possibly to indicate that this is his game and he is welcoming you to it. Another interesting thing to note is that the Toads on the boxart are in the same poses as they are in the New Super Mario Bros. U boxart, with the only change being that Blue Toad is now holding a Red Shell. Another main difference from the New Super Mario Bros. U boxart is that this one takes place in Soda Jungle instead of Acorn Plains, probably to show that due to the 100-second time limit in courses that you’ll be completely the game much quicker than the other one; it could also be because as the outer casing is green and Soda Jungle is a jungle which would be full of green trees and the like.

Hello, readers! I don’t know about most of you, but I’m getting ready to head back to school right now- and that’s something I’m not exactly looking forward to! So this month as I was browsing for this month’s sprite, I found this creepy guy from Mario & Luigi: Partners in Time: A skellokey!

I remember the enemies in Bowser’s Inside Story that looked like this guy, but they were made of teeth, I believe. And they weren’t nearly as creepy looking, either!