Hello, all, welcome to this December issue of Palette Swap! Not much in the way of news and events this month, except that we have unfortunately lost one of our writers, Henry Clay Tucayo (talk). You will most definitely be missed, Tucky. I’ll call upon anyone else who might like to write a section for us, we can work out a schedule if you think time might be a problem for you! We have a fantastic story from Paper Yoshi (talk) this month, too, so be sure to check out Featured Character Artwork! If I don’t see you all next year as Director, do know that it was a pleasure bringing you all fabulous artwork and news stories and working with our fantastic crew! Best wishes and Happy Holidays! ~FunkyK38 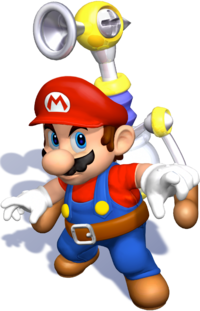 Hello, and welcome to another issue of Featured Character Artwork!!

Although most of you must be freezing in the Northern Hemisphere, the weather here in Brazil has been completely different, with high temperatures (around 32ºC/90ºF), as summer approaches. Thus, as an homage to that, I chose to feature Mario's artwork from Super Mario Sunshine this month.

The image's main feature (Get it? Feature!) is the Flash Liquidizer Ultra Dousing Device, known as F.L.U.D.D., carried by Mario on his back and used by him throughout the game. The device, created by Professor Elvin Gadd, allows Mario to spray water using the four different nozzles present in SMS: the Squirt Nozzle, used to squirt water at enemies and objects; the Hover Nozzle, which allows Mario to, as its name says, hover in the air briefly; the Rocket Nozzle, which makes Mario rapidly blast upwards after a brief charging period of time; and, lastly, the Turbo Nozzle, which allows Mario to run or swim extremely fast. As for Mario himself, the image shows his special outfit for Super Mario Sunshine, with a short-sleeved red shirt replacing his classic long-sleeved shirt, as well as blue overalls, white gloves, light brown shoes and his trademark red cap with a red "M" in the middle.

For a merry Christmas, I bring you a special GIF of Blizzard Midbus!

Look at him, King of the Cold, all ready to give Bowser a smackdown! Well, we’ll have to see how the fiery King Koopa deals with this chilly foe!

The Christmas Of Luigi Lakituthequick (talk)

Since I was asked again, and since it's The Year of Luigi and Christmas in a few days, I thought: I'll make something Christmas with Luigi in it.
Well, here we are! Christmas Of Luigi: Snow-globe Edition. Enjoy! 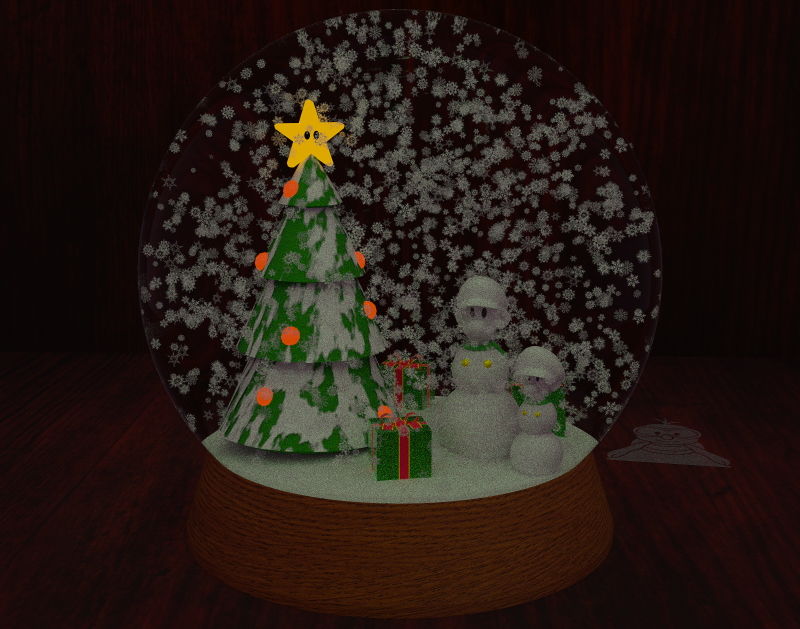 Do you have a Nintendo 3DS? Yes? That's very good news! You can view this image in 3D on your 3DS! Click or tap here to view it in 3D!
Furthermore, are you a little bit tech-savvy? Because if you happen to own a SmartTV with 3D-functionality, try getting the image above on it.

Well, that's it! Let's not forget to say one final thing: