Welcome again to the Fake News! I'd like to thank everyone who vote Fake News once again as the best sub-team in whichever award that covers. Last month's Section of the Month award went to our newcomer, Yoshi876 (talk) and his Obituaries, with 22 votes! Congratulations! Pyro (talk) and Alexneushoorn (talk) were the runners-up, with 15 and 11 votes, respectively.

Sorry this is so brief, but I'm running very late because I have a problem with procrastination I've been busy recently no, wait, I was right the first time. See you around!

Heeey guys again, it's Pyro. The awards are over, people can relax. Except for probably me, who for some reason is foaming from his face trying to get a VVVVVV race in before the boards are archived. But they're still over, and thanks to the awards, I'm going to go to the worst place in the world, voted by you, the users!

But...what's wrong with Banshee Boardwalk? It's a kart course with harmless fish and no hazards outside of bats. People must be way too scared of Boos. But whatever, I'm not going there. Guess it's time for good old random page to help me!

Boggly Woods is our destination! But seriously, I'm running out of places to go. 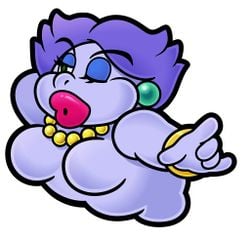 Boggly Woods is our monochrome forest of linearity with absolutely no puzzles in it. This means I can't get lost in it, right? Actually, no. That's not right. I got very easily lost in it, having no idea where to go! I couldn't figure out how to go backwards or forwards. I mean, seriously, they're paying me to be stupid! Eventually, I found a lovely house that looked incredibly relaxing. Of course, I went to it, because it certainly looked like an inn to me.

I checked into it, and there was this hideous monster inside! It was a purple wind thing with a huge... ... ego. She claimed she was a fashion star and had begun to introduce herself but I had already made a run for it.

After escaping from that horrible but nicely decorated house, I headed for a giant, clearly visible tree. I however got lost once again, but through sheer luck and paying for directions from swindling Piranha Plants I managed to make it. I went inside the tree for an old man to yell at me for stepping on their newly installed wood floors. I was immediately kicked out.

Since I'm getting payed to go to places, I decided to find a secret entrance! And sure enough, there was a giant neon sign that directed me to the secret entrance. I never would have guessed. After climbing through a really small tube, I fell out of a wall and straight onto a Piranha Plant. It hurt. However, there was a shop nearby, so I decided to pay a visit to it. They sold a variety of doodads, including some strange blue things that looked like Lumas. I asked the shopkeeper about this strange coincidence, and he said they were just plushies and totally not stuffed carcasses of star monsters imported from Brazil.

I believed him because I really don't think there are any star monsters in Brazil, but who knows? Science doesn't reveal everything! After gathering many plush Lumas just in case, I ran into an army of Clefts! I immediately used my plushies and they shrunk me down to a quarter of my size. I then was trampled by the Clefts. 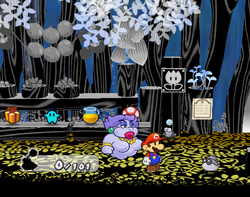 After this injury, I was determined to not be stupid for once. I then noticed a lot of the "bark" was actually paper and I found many secret rooms filled with violent flies, refuge Punies, and a lot of ripoff shops. Those same Luma plushies. For 8 million coins. The Great Tree has the worst shops.

All in all, if you're looking for somewhere to relax and not worry about ridiculous prices, Boggly Woods is not for you. Wind spirits and ripoff shops should be enough to keep you away from here.

Also, I'm seriously taking requests for where I should go next! PM me on the Super Mario Boards to tell me where I go next! Test chambers from Portal or New York City, I'll go anywhere as long as there are no Anuboos.

Hello, this is your ever young Koopatrol, Chief Alexneushoorn! With Mario and Luigi: Dream Team out in Europe, I'm gonna do a Police Blotter with that theme! Enjoy!

Popple was sneaking around Pi'illo Island, looking for loot to steal. He later arrived on Mount Pajamaja, and found a huge treasure chest full of coins. Popple put them all in his bag, but when he tried to run away with the bag, he couldn't because the bag was too heavy. Mario and Luigi saw it and they contacted HQ. I soon appeared in my Wild Wing, and arrested Popple for theft. Mario and Luigi then said some gibberish which I could understand. I gave a thumbs up and drove off to Koopatrol Patrol Inc. HQ. Popple will be staying in prison for 5 weeks.

Bowser, being sick and tired of Peach getting stolen from him by Mario, decided to raid a different kingdom for once. He broke into Pi'illo Castle and took Dreambert hostage. Eldream saw it all and contacted HQ. I followed Bowser all the way to Wakeport, where we duked it out for Dreambert. Bowser was tough at first, but after I got powered up by a Starman, I defeated Bowser in one hit. Afterwards, I arrested Bowser for taking a hostage. Bowser yelled out loud: CURSE YOU, ELDREAM! My burly agents Donkey Kong and Chunky Kong escorted Bowser to Koopatrol Patrol Inc. HQ, and Pi'llo Island was free of crime.

Ok, that's it. The stories are over. Well, I hope this will be enough to get that monthly bonus, because MCD only pays me 15 coins monthly, and the monthly bonus is 30 coins. Anyways, this is Chief Alexneushoorn, signing off.

Hello everyone! I’m writing this from sunny(ish) old England. However, unfortunately this weather has claimed a victim, the Abominable Snowkoopa who melted away earlier this morning.

The Abominable Snowkoopa was invited to England and its sunny weather because no-one had died and I needed to send in my Shroom section he needed a break from terrorizing the penguins of Antarctica. Police are currently searching for the letter that invited the Abominable Snowkoopa to England, however I burnt it they have no current leads, and are asking those who have information to come forward.

The penguins who live in Antarctica had this to say “We’re glad he’s dead, we know it’s a horrible thing to say, but we are. He was a monster to us, he always disrupted our snowball fights, knocked out our TV signal whenever our soaps were on, and just last week he dropkicked Larry to Kingdom Come.” Our reporter in Kingdom Come said that Larry was unavailable for comment.

Big Mouth Koopa, the creator of the deceased had to this to say “His death is awful, devastating, catastrophic, horrific, dreadful, unpleasant, atrocious, depressing, appalling and dire. When he was alive he was brilliant, magnificent, resplendent, excellent, grand, noble, sublime, outstanding, impressive,” he probably said more, but I decided to leave before I ripped my own ears off. One of my reporters says he’s still talking. 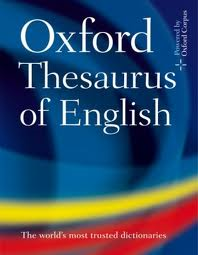 The reason you should never interview Big Mouth Koopa

In the aftermath of the Abominable Snowkoopa’s death Antarctica has become a much more peaceful place, and no more penguins have been kicked to Kingdom Come. His death also contributed to the scenery as many flowers have grown in the place that he melted whilst I watched.

Hello, everyone, and welcome to another issue of the section in which I answer questions submitted by our beloved readers during the weeks preceding the time of writing this section, also known as Ask Paper Yoshi, in case my description wasn't obvious enough.

Anyway, enough with the not funny at all jokes! About a week ago, as of the time of writing this, I got two questions from Gonzales Kart Inc. (talk), known as HydroGuy3503 on the forums, who asks:

Why do you have like 4 things to do on the shroom anyway? and do you like the smiley :posh:?
Now, the first one is an easy question. In case you didn't know, and I'm sure many fellow staff members and other long-time writers and readers must be tired of reading this (sorry, guys :P), I really love writing for The 'Shroom, and so I have been applying for different positions every year since I was initially hired, in 2011. Another factor that highly motivated me to continue writing for the paper was my promotion to Pipe Plaza Director, in 2012. It showed me that I could actually achieve great things in The 'Shroom, and that's why I always do my best to ensure our readers get wonderful sections every month.
As for the second question, yes, I do like the :posh: smiley, which surely is one of the best smilies ever.

I guess that's it for this month, folks! If you have any questions for me to answer, remember to send me a PM with all your doubts! See you next month!