From the Super Mario Wiki, the Mario encyclopedia
< The 'Shroom:Issue LXXIX
Jump to navigationJump to search

Greetings, all! Not much on the front of news for this month, except for the usual plug for staff sign-ups! If you would like to write for Palette Swap, send me a PM with your application and we’ll get the process going! Now, onto the art! 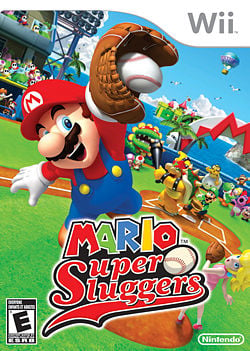 HI, readers! I'm your talented Co-director, Tucayo, here with a brand new What's on the Box? For some, October means Halloween; for others, it means falling leaves and dying trees; for a couple more, it means Pumpkin Spice Latte; but for me, October only means one thing, baseball. That's right, ladies and gentlemen, even though my Yankees didn't make it to the playoffs this year I'm still enjoying them big time. And so we move on to the Mario Super Sluggers box art, where we can see Mario as the pitcher with a defensive play Raúl Ibáñez would be jealous of; Peach visibly confused by everything happening around her; Bowser with a batting stance even more ridiculous than Kevin Youkilis'; Luigi looking in a direction where nothing could possibly be happening, since Mario caught the line drive right in front of him; and a bunch of people in the background rooting for no apparent reason. Ah, the joys of baseball. 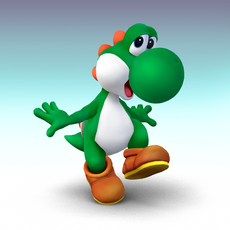 Hello there, and welcome to the October Issue of Featured Character Artwork!!

There isn't much I can say about the image, though; it's a high-quality picture of everyone's favourite green dinosaur, and also a very detailed one, as all Brawl artwork, for that matter. The game, despite being a Nintendo Wii title, has amazing graphics, and that is reflected on its art. The image shows details such as Yoshi's green skin, his red spines and his shoes, with an updated look from previous games.

This month, our sprite comes from Mario & Luigi: Partners in Time: it’s a Gnarantula, for Halloween

! Although some people find spiders cool, I, for one, don’t. However, this little guy doesn’t look too threatening… until he attacks! Hopefully you don’t get bitten!