Greetings, all, it’s a pleasure to have you here! We are currently hiring, so please consider signing up for a job! Most of them are very easy to do and you can even sign up for a bi-monthly plan, where you only have to send in a section once every two months. If you’re interested and would like more information, visit our sign up page off of the main ‘Shroom page, then sed me a PM with your application! 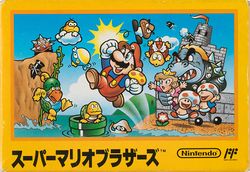 HI, readers! I'm your pine-scented Co-director, Tucayo, bringing you another box art! And yes, it is yet another Japanese box art. This month I decided to review the Japanese cover of Super Mario Bros. Significantly different from the American box art, this one is an artwork that perfectly summarizes the game in one image; whereas the immensely popular American one is basically a sprite of Fire Mario jumping and throwing a fireball. Back to our cover in turn, on the right side of the image we can see a fortress, with a weirdly-colored Bowser holding Princess Toadstool hostage, with a couple of jumping Toads, which are both oddly joyful, despite having balls-and-chains on their legs. A plethora of enemies can be seen surrounding Mario, most of which look rather peculiar. Oh, and is that Lakitu holding the Spiny with a chain? I don't even remember that happening, but maybe it was because of the graphics. Or maybe this one is his pet Spiny? Anyway, I'm senselessly ranting, so I'll just wrap this up. Thanks for reading, BYE! 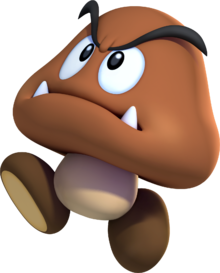 Hello, readers, and welcome to the May Issue of Random Image of the Month!!

This month's Random Image is a simple one. It depicts a Goomba as it appears in New Super Mario Bros. U.

Goombas are one of the main enemies faced by Mario and Co. through their adventures. In the Super Mario Bros. games, they are found in the majority of levels, usually being the first enemy encountered by the player in the first level. They are a fungus-based species, resembling brown mushrooms. Additionally, Goombas are very weak, which allows the player to easily defeat them with a single stomp.

As for the image itself, it is extremely detailed due to its high resolution, showing every single trait from a regular walking Goomba, such as the two pointed teeth or the lack of arms.

This month, I bring you all a sprite of an Eeker from Mario & Luigi: Superstar Saga:

. He looks a bit summery, in a Hawaiian skirt sort of way. He also looks like a beaker, but that seemed too obvious. Anyways, let’s let him usher in the warmer weather! Summer, here we come!