Just a couple of notes before we start.

-Fawfulfury65 and Soniccity08 have both resigned from their sections. -Paper Yoshi's Random Image of the Month has won M&A's Section of the Month for the September issue. Congratulations! 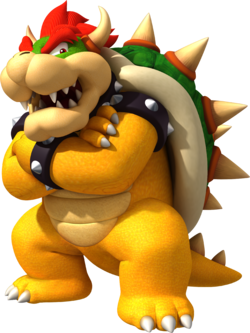 It was inevitable that sooner or later I'd pick a Bowser artwork. But to break things up from all the pretty hand-drawn artworks, here's a more modern piece that I rather like. It's the newer, consistent-of-appearence detailed Bowser in a nostalgic pose from (as I know it) the sticker artwork of Super Mario Advance 2: Super Mario World!

Hello, everyone, and welcome to Random Image of the Month!

October's Random Image comes from the same game as the one from August: Super Smash Bros. Brawl. It depicts Pokémon Stadium, one of the forty-one stages from SSBB, as it appeared in said game.

It starts as a simple stage, with two floating platforms, but, later, it changes into one of four types of terrain: Water, Fire, Rock and Grass. Unlike Pokémon Stadium 2, no Pokémon appear in any of the different forms the stage changes into during battle.

[[1]] Enjoy the Luigi's Mansion Theme. Luigi's Mansion's was composed by Shinobu Tanaka and Kazumi Totaka, Totaka's Song can also be found in the game in the training area. [[2]] Totaka also composed the great music of Super Mario Land 2. Enjoy the Pumpkin Zone Theme!

Grant Kirkhope produced the music of Donkey Kong 64. Enjoy the scary Creepy Castle theme. As you probably know, he wrote the DK Rap, which contained the word "hell". In most English-speaking nations, "hell" is considered profane (albeit mildly) when used as a curse. This is usually the case in Great Britain, but not when it is used as an intensifier. Therefore, Kirkhope had no idea he was doing anything wrong. I don't either, even if by chance he had known. Turn the lights out in your room, and enjoy the Halloween-theme music. I hope it gets you in the spirit. [[3]]

Expecting a sprite of Bowser? TOO BAD. MIDBUS TIME. I bring you Midbus, from Mario and Luigi: Bowser's Inside Story!

Why did I choose this villain? Because I will be choosing VILLANOUS sprites from now until January to celebrate the upcoming release of Wreck-It-Ralph in theaters! Bowser will make a cameo in this, along with Sonic and Dr. Eggman! So you should all go see it! It looks great!