Welcome ladies and gentlemen to the Mario Kart: Wheel Tips Corner. Today I'll talk about an exclusive character that has made unexpected appearances in these last years. It came from the NES era as a toy, it's robotic, and it is your buddy. Yes, it's R.O.B.. R.O.B (Robotic Operating Buddy, AKA Famicon Robot in Japan) is a type of accessory for the NES that could be used for a few games that required it. Being a fundamental part on Nintendo's history, R.O.B. has appeared as a cameo in various games. It wasn't until 2005 where this robot appeared in Mario Kart DS as a playable character for first time. R.O.B is exclusive and interesting in this game because it's a character from other series. R.O.B. has never been part of the Mario series if you didn't know, and Mario Kart DS can be considered one of the few cross-over Mario Kart games that appeared so far (along with the Mario Arcade GP sub-series where they have Pacman and company as playable characters). Currently this can be the only game that our Robotic Operating Buddy appears in, as it has not reappeared in later Mario Kart games.

Being the unexpected one, as you can see, R.O.B is an unlockable character in this game. It can be unlocked if you earn all the gold trophies in Mirror Grand Prix mode, either racing the Nitro or Retro cups. Once unlocked, R.O.B already comes with its default kart Standard RB and its two special karts the ROB-LGS and the ROB-BLS. In the game, R.O.B is a heavyweight character, therefore its vehicles are also heavy (but not the heaviest). 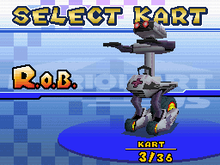 Yeah, it's weird and unsettling looking at ROB with "legs" and a cab as a "diaper".

The ROB-LGS is a kart with an unusual appearance. It has a high body with a small cab supported by two small wheels in the front and one big wheel in the rear. The wheels are connected to the body by leg-like hinges. When R.O.B uses it, it looks as if R.O.B had legs with roller skates, and if you see it from behind it almost resembles R.O.B riding a unicycle. The character's decal is located on the front of the body. Now let's see the stats:

Despite its outrageous appearance, the ROB-LGS has an almost excellent speed with a contrasting acceleration, as usual in the heavyweight vehicles. The weight, as well as its handling, is decent but relatively low for a heavyweight. The kart has the lowest drift in the game, compared to other vehicles of its class, while the item ratio is on the top, granting high possibilities to obtain rare or strong items. 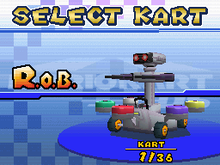 Rather than a vehicle it's a wheeled bath tub made for a robot.

Now look to R.O.B's secondary vehicle, the ROB-BLS. This kart, like the ROB-LGS has a curious appearance as it is modeled after an accessory for a NES game called Stack-Up. Unlike the other kart that we talked about shortly, the ROB-BLS has a low body and a big cab where the character sits. The kart has five hollow round extensions with a stack-up piece of different colors over each one and with the character's decal over them. The kart has four small wheels coming from the sides of the body. These are its stats:

The ROB-BLS has slightly enhanced stats over the ROB-LGS. It's the fastest kart in the game with an average acceleration, but a bit better than ROB-LGS'. The weight is also slightly increased and has a good handling and low drift (despite its enhancement, the drift is still low). The items ratio is low, as the vehicle is more suited for speed than for the player's awareness.

To resume, R.O.B's karts are extremely good. Both of its exclusive karts are good in several ways, but the ROB-BLS gains a bit of an advantage. It is one of the selected karts for advanced racers and is extensively used in Time Trial modes for being the fastest vehicle. Having a very good handling and low drift, the kart is also nice for running over loose and rough terrain, which is unusual for heavyweight vehicles in reality, as they lose much control, but R.O.B's karts don't. However, there is a disadvantage and that is that R.O.B's karts are really big. Because of that, it's possible to be an easy target for items like the Red Shells, as they can hit you from any direction, especially from the side. Even if you are protecting your rear, you need to maneuver well to avoid items hitting you or else you'll lose your place and it can be hard to regain the time you've lost.

On a side note before finishing: In the Japanese versions of Mario Kart DS R.O.B. is white and his arms are red, which is inspired from the Japanese R.O.B. models called HVC-012. All other regional versions depict R.O.B. gray. However, the staff ghosts from Desert Hills and Rainbow Road show R.O.B in its Japanese model, which can be justified as the ghosts were played by Japanese people who worked on the game.

And that's all, Shy Guys, in the Mario Kart's Wheel Tips Corner. See you soon for another tip next month, and for news about the upcoming E3, 2012!