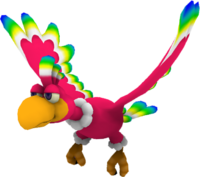 I really dislike that facial expression.

Hello everybody! Welcome to another issue of Character Reviews. Man, I've been out of it for a while with this section. I guess I was just recovering from that TTYD run - never doing that again! I'm still accepting requests as to which character to review, but from now on, only one request at a time please!

So I had no requests this month, and since it has been exactly one year since Special Issue L was released, I decided to review a character very similar to Rawk Hawk, who I reviewed in that issue. This month I'm reviewing another bird, but a lesser-known one who was personally one of my favourite elements from Super Mario Galaxy 2 - Fluzzard!

Fluzzard doesn't have too much presence in the storyline of the Wild Glide or Fleet Glide galaxies, and I wish they had included more backstory to him. He's more of an element of gameplay than an actual character, which is what these reviews are all about. The extent of his backstory is that he is a shy bird; not very in-depth. Just giving Fluzzard the ability to speak could have made his character much more in-depth, however he remains just a tool to be used by Mario.

The implications that Fluzzard is mentally deficient may be a half-baked attempt at humour, but that kind of humour is not funny, so I don't really find anything about Fluzzard funny (except watching people try to fly him for the first time).

Fluzzard had much potential to be honest. They could have had an internal storyline within his galaxy, like they did with the Throwback Galaxy. For instance, Fluzzard is standing away from the group of birds in the Wild Glide Galaxy. When Mario talks to him, he reveals that he is shy and wants to race the other birds. Then they race together, and Fluzzard tells Mario that he now has the confidence to travel the galaxy in search of new challenges. That sets up the backstory for the Fleet Glide Galaxy.

Another option would have been to make Fluzzard another minigame, like The Chimp. They would just clear obstacles from the pathway of Fluzzard and have Mario fly on him to the finish line. I would quite enjoy that, as flying Fluzzard was really fun.

Not much. He makes two mute cameos and is then another Yoshi.

You totally thought this report would look different, didn't you? Wrong! I said I loved Fluzzard as an element of the game, and I do, but as a character, he really needed more development and usage. Flying was an ingenious idea that the game could have abused much more. I give Fluzzard a total of 5/10. You can see below for more information.