Hello Mario Karters to the Mario Kart: Wheel Tips Corner. This is Coincollector, here to tell you the first tip of the year 2012. But first I want to tell you that 2011 was an awesome year for Nintendo enthusiasts: The release of the Nintendo 3DS, the announcement of the Wii U in the E3 2011, the announcement and release of Mario series' games Super Mario 3D Land and, of course, Mario Kart 7. I also want to thank all of you in the The 'Shroom's End-of-the-Year Awards of December in which I could earn five of the six categories (Mario, Bowser, Peach and Toad), and a honorable mention in the Golden 'Shroom category along with other featured editors. After all, MrConcreteDonkey (talk) was the winner of that award, as he has made nice articles about games and their dumped concepts, and elements not seen in their release. As proof of that, I suggest to go to this interesting article from December that is about Mario Kart 7. Enjoy reading it, and congratulations to MrConcreteDonkey and all of the members of The 'Shroom who have done an excellent job this last year.

Now, the tip of this month will be about two vehicles of Mario Kart Wii: The Baby Booster and the Bubble Bike. Both of these vehicles can only be used by the characters of the small size class. 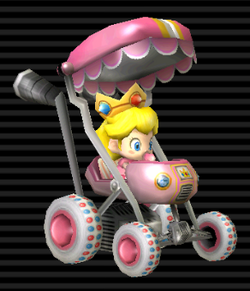 If my children could have one of these...

The Baby Booster (Booster Seat in North America) is a kart in the shape of a baby stroller with an engine and long exhaust pipes. It has also two headlamps on the front and a roof that covers the cab and usually opens and closes when characters perform a trick. As a curious note, the kart can change its appearance when you select some characters (If you select the Baby Mario brothers, the kart doesn't have fringes hanging on the roof and if you select Koopa Troopa or Dry bones, the hub caps show the design of their shells.) Now let's see the stats:

The Baby Booster is the slowest kart in the game and one of the lightest. In contrast to that, the kart has the best mini-turbo, acceleration and handling. 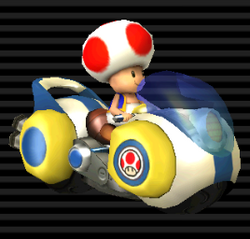 From those who manufactured Yamagata's Bike of AKIRA...

The Bubble Bike (Jet Bubble in North America) is an unlockable motorbike with a streamlined fairing and a dome-shaped windscreen protecting the headlamp. The Bubble Bike can be unlocked by winning the Leaf Cup of Mirror engine class. These are its stats:

The Bubble Bike has in general balanced stats. The speed and its drift are the only stats that go above the average, whereas its weight goes below, similar to the Baby Booster.

In my opinion, the Baby Booster is the least practical kart you can have, as it is the slowest vehicle in the game. However, it can be useful for beginners to learn the basics and to understand vehicles' stats. On the other hand, the Bubble Bike can be ideal for intermediate players because it has good speed and drift. Additionally, the Bubble Bike is the only well-rounded motorcycle in the small size class, excluding the weight stat.

And that's all for this month ladies and gentlemen. See you next month for another tip in the Mario Kart: Wheel Tips Corner of The 'Shroom.