Hello, everyone, and welcome to another edition of Fake News! There's not too much else to say here, but, since I was running out of ideas for the Fake TV section, I've decided I won't write that every month. Instead, since, as the director, I can, I'll vary a little bit in the Fake News sections I write. Expect to see some different sections from me, from here on.

Anyway, yeah, there's not much to say in this editorial. No firings or whatnot. Congrats to SMB for winning the Director Election again. Enjoy the section, because it's a lot better than last month's! 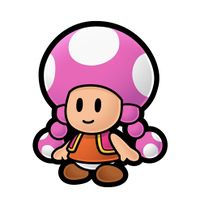 Every year, Toad Town holds a contest for the most attractive girl in the town, and, this year, the winner is Toadette! Last night, as the contest reached its final stage, Chuck Quizmo announced her as the winner.

The basis of the contest is judging the girls on how beautiful they look, and what nice people they are. Many girls enter the contest every year, and the contest is, usually, very difficult, as the girls in the contest are all very beautiful. This year, there was a shock entry, from Tayce T., a local chef. She was much older than the other contestants, but...well, she cooks nice things. Princess Peach, who had entered the contest a couple of times in past years, was on the judging panel this year, as were Toadsworth, Mario and Yellow Toad.

All of the participants. It was a very tough choice.
In the end, Princess Peach and Toadsworth gave Toadette 9/10, while Mario gave her 8/10 and Yellow Toad, 10/10. This was just enough to put her into the lead, and, overall, win the competition.

"The girls were very beautiful." said a nearby Koopa Troopa. "I'm happy for the winner, I thought she should have won."
"My brother was on the judging panel!" the Green Toad said, "He's in love with Toadette, but that's a secret, so don't tell anybody."
"I was too small to see the stage. I just came for the popcorn." admitted a Puni, before the Puni Elder dragged him off for a lecture. We had to evacuate the scene quickly.
"Hi mom, I'm on TV!" Luigi told us. We had to cut the scene out of the TV report due to time constraints.

All in all, it was a fantastic contest, probably the best Toad Town has ever seen. Thanks for reading, and look forward to next year's contest!

Welcome everyone to the Fake Interview! Your host – Baby Mario Bloops – here to scoop unexpected characters you all adore into an interview! No really, there’s great ice cream with scoops in the back stage area, and what Mario character doesn’t like fire-flower-flavored ice cream?

Well, before I bore you all with my ranting, let’s give a warm welcome to our interviewee. Just don’t make too warm because this character likes to live in the dark, damn comfort of a pipe! Come on out Piranha Plant!

BMB: …shoot, I forgot. Someone tow the pipe into the room!

BMB: …well, while we are waiting, how was everyone’s Valentine ’s Day? Sure hope no was lonely…okay, here they come!

Piranha Plant: Hey, be careful with that! This brick green Pipe 2009 cost me a lot of money to buy!

Piranha Plant: Whatever, can we move this one? There’s a plumber out there, and I don’t want to dilly-dally and not chomp at him.

BMB: Okay then…let’s see…ah yes. Where does the Piranha in your name come from? Obviously you’re not a Piranha.

Piranha Plant: You dimwit! I’m a piranha, but not the little chaotic fish out in the sea! I’m a Piranha Plant, P. L. A. N. T!

BMB: Geez, you don’t have to get all upset. Moving on…are you related to other similar species, such as Venus Fire Trap, or Ptooie?

Piranha Plant: Are you talking about my cousins? Yeah, sometimes hanging out with them can be a pain. I bite while they shoot fire or spit out spikes. Never want to be around one when they have a tantrum.

BMB: I’ll…I’ll keep that in mind. What’s the joy of living in a pipe?

Piranha Plant: What’s the joy of living in a house? It’s my home, you idiot! This pipe has supported me when Fireballs fire at me, invincible plumbers run by, or even when other enemies want to evade. I even raised a family and saw them depart to other pipes while here.

Piranha Plant: Yeah, it’s a great story and all, but not as good as when I was attacked by the Plumbers.

Piranha Plant: Are you going to let me speak?

Piranha Plant: Okay. So, there I was in my pipe in World 4 when those brats were jumping on through the level. They had that overconfident smirk in their Fire Flower power-up, bowling Koopa shells into Goomba’s and destroying bricks.

Piranha Plant: Are you going to keep interrupting?

BMB: I’m the one doing the inter-whatever, I’ll shut up.

Piranha Plant: …Well, as I was saying, they were coming at me fast. I was very nervous, unsure if I could make Bowser proud of me. They were ready to attack me with a fireball, but thankfully I ducked in time. As they hopped onto my pipe, I sprung up, and de-leveled them back to normal!

Piranha Plant: Basically-oh wait, forgot something. Boss was so proud of me that he moved me from World 4 all the way to World 5! Those promotions are unheard of! Shows how powerful I am!

BMB: Well, that was very interesting. Anything else as we begin to end our interview?

Piranha Plant: Oh shoot, I need to get back to World 5! DARN IT, EITHER SOME TOWS ME BACK TO WORLD 5 OR ELSE I’M EAT YOU ALL!

Worker: I don’t get paid enough for this job.

BMB: You all don’t get paid for complaining either, so hurry before I’ll personally make you pay for all the liabilities I have if he goes rampant.

BMB: Well, with that, I’ll see you all next month, and I hope you enjoy the rest of February!

Hi everybody! Here’s your hostess, Chivi-chivik! And this is Cooking Guide, where we teach you how to cook excellent dishes!!
So, let’s go!

We know that Valentine’s day is already gone, but we’ll show you a Valentine’s recipe anyway!

I will spend the day along with the most kindhearted chef we know: Saffron!!

Me: *opens the door* Hi... *looks everywhere*
Saffron: *very happy* HI~!!!
Me: What the...?! It’s not Valentine’s Day!
Saffron: Don’t worry! It’s a special decoration for our cooking session!
Me: Well... we are going to cook... some Lovely Biscuits!!
Saffron: *joyfully* I love doing this dish!!
Me: *thinks* Eh... you enjoy doing ANY dish...
Saffron: As I can remember, we need some Cake Mix, a Pink Apple and a Lovely Chocolate.
Me: I brought all the stuff!
Saffron: Okay, first we’ll need to make the cookie dough with the cake mix!
Me: OK...
Saffron: I need you to melt the lovely chocolate! Then we’ll need to make apple juice!
Me: I’m not so good at cooking... but whatever!

--some time after melting and kneading the dough...—

Saffron: The dough is ready! I’ll go to make he apple juice, put the chocolate inside the bowl!
Me: Okay!
Saffron: When you put it inside, go mixing the dough!

--after more mixing and kneading and squeezing...—

Saffron: Here’s the juice! We put it inside the bowl and keep mixing and kneading for few minutes.

Saffron: And voilà! These are the lovely biscuits!
Me: Mmmmh... they smell good!
Saffron: They are made to make someone to fall in love!
Me: I’d better not smell the biscuits much... eh... thankies for being with all us!
Saffron: You’re welcome. You know I’m always available. 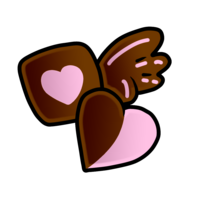 Ingredients: Cake Mix, a Pink Apple and a Lovely Chocolate

1- Make the cookie dough with the cake mix
2- Melt the lovely chocolate and make juice with the pink apple
3- Mix all that
4- When you get a good dough, make shapes with some cookie cutters
5- Put the biscuits in a hot oven for 35 minutes

I hope you have get someone’s heart this year, and if not, do this recipe and let’s see what happens the next year! Thanks for being here reading, until next Cooking Guide!!

On this month's edition of Character Battle, we will have some fan favorite characters, Lakitu and Toad. Thank you all for voting, and be sure to vote next month! 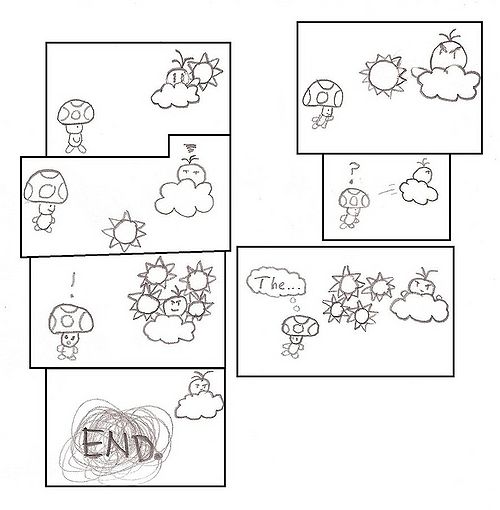 So, what stock does this shop have? 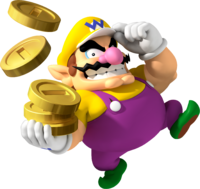 The owner, holding just some of his plentiful profit.

Wario has a story behind every piece of his stock. He claims to have been a treasure hunter up until recently, and, apparently, cheated death to get these "rare treasures", each of them, for some reason, being retrieved from the same, generic Egyptian pharaoh or whatever at the exact same time. This is obviously not a coincidence, and this brave man deserves a lot of credit for his many achievements. The shop is located...well, apparently I can't tell you where it is, because Wario is a very ille– I mean, a very shy man, who dislikes company. Seriously, throughout this interview, he's been hiding under the desk well, at least one of us is.... The shop prefers to stay underground, so just keep walking around the sewers and you might find it, or, who knows...maybe it will find you?

Thanks for reading, and remember, Wario for President 2012.

Oh hey, this is late so I better get this in before MCD yells at me. I don’t like when MCD’s mad. Anyway, let’s get on with it.

I am absolutely terrible with both Ness and Lucas. I can’t give you a specific type of character, but I can give you a top 5. Falco, King Dedede, Marth, Wario, and Samus. I didn’t include Meta Knight because everyone’s good with him.

Over. Under just looks funny to me.

Eenope. I’ve never been much on Zelda, sorry. Come back if you want to talk Metroid, though.

I saved the hardest for last. Tulaash inquires:

I had to make a thread on the forum for this since it was so effing difficult to pick just one. After much soul searching, meditation, and nerding out to video game music for a week, I have ultimately decided on the “Big Blue (Decide in the Eyes)” track from F-Zero X. It’ll probably change by next week, though.