Welcome to another great month of the 'Shroom! I hope you enjoy what the Music & Artwork team has to offer! As with the last issue, I am accepting all user artwork that is appropriate and related to Mario. So, if you have any drawings, please send me them to me in a personal message on the forums. You can ask me for more information.

Hello everyone, and welcome back to the Screenshot of the Month! This time, I have chosen a screenshot from the upcoming game, Mario Party 9. Although there is a chance that this is a beta image, I think it is worthy of being a Screenshot of the Month. It is very high quality and big, and it lets us know that Whittles, characters from Super Mario Galaxy 2, are going to reappear! The image seems to show a minigame of Mario Party 9, where characters have to hit a tree stump with an axe for unknown reasons. A meter is at the top of the screenshot, which indicates that the players will have to do something to fill that meter and win. That's all for the Screenshot of the Month; tune in next month for another great screenshot!

Hi everyone! I have only received one artwork this month. If you have any drawings related to Mario that are appropriate, please send them to me by PM.

This month's only artwork was drawn by EctoBiologist (talk): 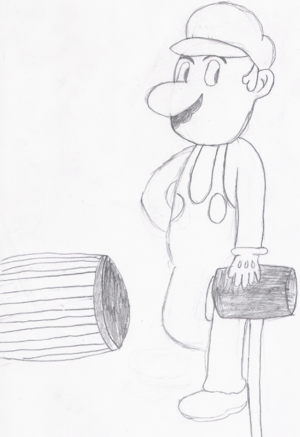 That's all for this month!

In honor of Nintendo announcing Luigi's Mansion 2, I bring you these sprites of Luigi from Super Mario World!

After featuring Mario for issue 50, I decided to give Luigi a little time in the spotlight, so here he is! 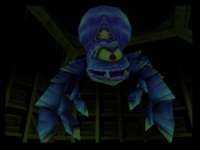 This month's Random Image is the Giant Spider, from Donkey Kong 64. It is a mini-boss found in the Fungi Forest that is fought by Tiny Kong. The spider lives inside a lair. Because the fight takes place inside the spider's lair, the image is very dark.

Now this month, I’m going to present you five soundtracks of my favourite Mario game, Mario Kart : Double Dash !! This game, released in 2003, contains some fantastic music pieces which are perfectly emphasizing the chaotic and effervescent races in the Mario Kart series. Just listening to this music gives you the nostalgeek nostalgic feelings and vibes of the unfortunately very short GameCube period. Today’s video games are still very good and Nintendo still creates master-rendered and beautiful video games, but you feel something’s missing: Could it be fun? The fun of playing those old-school games which didn’t put that much emphasis on graphics? No, it is not. It is rather your childhood you’ve lost or you will lose. Memories of your childhood are attached to those games and therefore you just love them, because you can recall your memories. The first games you play in your life will remain the best ones you will ever have played, be it on SNES, N64, GameCube or already on the Wii… So, video game music is one of the means of recalling memories. (:

You could also call it ‘main theme’, as it truly is THE racing theme of Mario Kart: Double Dash!! It is just exhilarant and beautiful, one of my favourites!

Just add some bowser shells and giant bananas, 9 laps, invite some friends and voilà! The most chaotic track in Mario Kart History, even it is also the smallest one, you can have a maximum of fun!

Why on Earth are there Bomb cars driving around? Where can you find a bomb car licence? And those wigglers… Still, it is my favourite racing course in this game.

This music reminds me of Super Mario Sunshine! It’s relaxing and calm, although you can still feel the blue spiny shells breathing down your neck, brrr…

Wario’s got… a colosseum? Well, I don’t mind

And now, for the most beautiful soundtracks in the Mario Kart series, the Rainbow roads! Well, you haven’t only good memories for this one… I think some of us just wanted to smash the TV screen when being on 1st place and then flying off an edge. :3

Hello, MarioWiki! I'm Mariomario64, writing for the 'Shroom for my very first time, here to bring you the Soundtrack of the Month. Since June marks the beginning of summer for those in the north half of the world (that includes me), I've decided to choose a more laid-back song. So, I chose the world map music for World 4 of New Super Mario Bros. Wii. I have supplied a link to a YouTube video, which plays the song for 15½ minutes!

I hope you enjoy the music! And for now, goodbye. 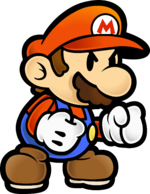