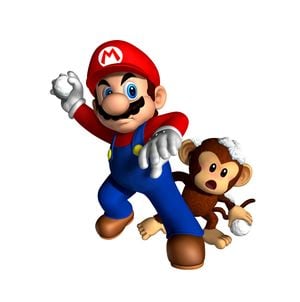 It is not difficult to compare Diddy Kong to Ukiki, There are both monkeys, after all. Diddy is famously quick and nimble. But Ukiki must be too, for he is fast enough to rob Mario of his hat in Super Mario 64. Not only that, Ukiki is also speedy and nimble, as he is not easy to catch to retrieve that hat. Which brings us to physical appearance: They are both monkey, Diddy being a chimp, Ukiki being a generic monkey. They are both about the same size. And most amazingly similar, they both wear red hats! Diddy is famous for his red hat, which had the Rareware logo until the treacherous company Microsoft (booooo!) bought them up in 2002 and destroyed one of the greatest companies of all time. Diddy is now property of Nintendo and the name of the Japanese company that means "Leave luck to Heaven" is now the logo embroidered on his hat.

Ukiki wears a red hat too, but it is not his. And he only gets to wear it when he steals it from the famous plumber, Mario Mario through his trickery. But it is an amazing coincidence. Ukiki will never be a famous adventurer as the more famous of the two simians, Diddy Kong. In fact, he even saved his best pal DK from the Kremlings in one of the greatest 2D platformers of all time. Nobody messes with a member of the Kong Family, for if you mess with one of them, you mess with all of them. In Mario Party Advance, when Ukiki's is kidnapped, his relative, Akiki, sends Shroomlock to go find him. I believe had her name been Akiki Kong, the she would have gone to rescue her relative himself! The bravery just isn't there. But Ukiki faked his kidnapping! It was all a hoax! Ukiki is only good for mischief. However, Diddy has sometimes shown to have a mischievous side, such as the cutscenes of Mario Power Tennis. Nevertheless, Diddy is the superior character. He would whoop Ukiki's ass, and that is why Diddy Kong is this month's Winner. 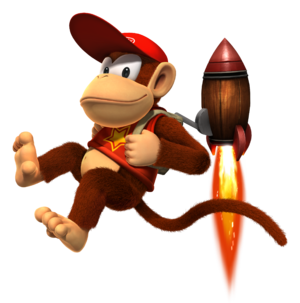