Nice work, Parayoshi! GREAT work! I was going to make a list, but yours is even better! 3D

Thanks! I only have two more enemies to unlock!

How do you defeat debulls? I've tried groung pounding them, hitting them with eggs, and throwing Shy Guys at it, but It won't die!--

knock it off the edge of a platform to defeat the bulls.

Should this be called the Enemy Museum? The game never refers it to Island Museum...does it? Paper Jorge

No it doesn't. I'm playing it right now and it says "Enemy Museum".--

Right when you enter the museum, the talk box right above Yoshi says "Welcome to the Island Museum!" Wa

You're right, I got mixed up when it says "Keep track of all the enemies you've beaten".--

Are all these names official? And what is the source? -- Son of Suns 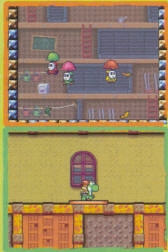 I found this in the instruction booklet. We need a picture, but can't we use this untill we find one from the final version. --

I agree. Sounds like you have some work to do, my friend!