The Gold Mantis is one of the thirty-six karts in Mario Kart DS, as one of Waluigi's karts.
What exactly does this bit of trivia have to do with Foreman Spike? Neither this article nor the Gold Mantis one explains this.--vellidragon 20:08, 26 May 2010 (EDT)

It's suggesting that the MKDS kart that Waluigi drives is a reference to the crane that Foreman Spike drives. While it is possible that this could be an actual reference, there's no validity behind it, so it's been removed. --Marcelagus (T • C • E)

Why is his profession part of the name? As far as I know, he's never even called "Foreman Spike". The Wrecking Crew manual lists him as a foreman, but that's it. 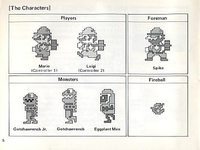 The Mario article isn't called "Player Mario", nor is the Eggplant Man called "Monster Eggplant Man". It seems the situation is similar to that of Stanley the Bugman, who was recently moved to Stanley (Donkey Kong 3) when it turned out he isn't actually called "the Bugman" anywhere. Unless there's any counter-arguments, I think this page should be moved to Spike (Wrecking Crew). Aokage (talk) 08:04, 18 May 2014 (EDT)

If you think that that's the case, make a TPP. -

Not everything needs a TPP. Stanley didn't. This is cut-and-dried unless someone provides an instance where he's referred to as "Foreman Spike". Aokage (talk) 08:12, 18 May 2014 (EDT)

Is this the only good English source for the foreman's name? If so, then the decision to move should be a self-evident one. LinkTheLefty (talk) 01:21, 1 October 2014 (EDT)

If it is the only English source, it's a very dubious one.

Ah, according to a transcript of that same manual, he's Foreman Spike practically everywhere else. LinkTheLefty (talk) 02:21, 1 October 2014 (EDT)