From the Super Mario Wiki, the Mario encyclopedia
< The 'Shroom:Issue XXXIX
Jump to navigationJump to search

A lot of games only have fragments of elements left, which makes selecting a game to write about difficult. I didn’t want to do another RPG game. Not just yet, anyway. I went through about four other games and rejected writing about them. Yes, Mario Kart 64 managed to beat out other games.

The beta title might be a good place to start. The “R” I think, astoundingly, stood for “Racing” and it was mostly a project name. I have a feeling the SNES game was made under a project titled Mario Kart R, making this Super Mario Kart R. Nintendo seems to like using the first letters of words for project names. Isn’t that how the Nintendo DS got its name? 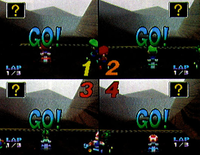 In case you’re confused as to what a driver does in a race.

Many of the known changes are cosmetic, such as the racers facing the player / screen / 4th wall directly in the beta. A few of the cosmetic changes are a little interesting. I also think that the beta start graphic reading “Go!” may just be a placeholder. I don’t want to seem like a one‐trick pony, so let’s move on. 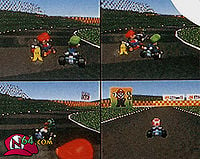 Someone left a yellow squid on the track.

The beta boxes are black with white/rainbow trim and seem to match the roulette box more. Strangely, the boos look more like the ones in Super Mario 64 than the boos in the final game (or the other “beta boos”).

The Beta character select shows Kamek. (Well, it could be any Magikoopa, really. They all look the same to me, but everyone seems confident that it’s Kamek.) DK does not appear on the beta character select. Interestingly, there’s a screenshot showing Kamek from behind on a track which appears to be DK Jungle Parkway. This could mean that DK was either unlockable or some sort of boss, or perhaps that there was a point in development when both were in the game. Another thing to note is that none of the karts in the final game have the large wheels that Kamek's does.

Now that we’ve combed though graphics, let’s talk about feathers. The beta roulette, so I have read, contained a feather item. I Assume the feather would make a cape and let people glide. This could be useful on some courses, like Koopa Troopa Beach (making that strange booby trap useful if you could glide over it). Banshee Boardwalk has one drop, and a pit you could possibly glide over. It could have been very useful in Yoshi Valley as well. I think it was removed because in more than half the courses it would have been useless – take Choco Mountain, for example.

Aside from the removal of Kamek, I don’t think the game lost much of anything. A racing game can normally do with a few more characters, and I think eight is sort of restrictive. Perhaps the game engine couldn’t handle nine racers, and the developers liked DK better. Perhaps they couldn’t think of a course for Kamek. For better or worse we can’t race a Magikoopa or glide over pits and our banana peels have vanishing eyes (but actually look like bandanna peels).