Hello 'Shroomers! Welcome to the latest issue of the shroom. I am sorry to say i am retiring from the shroom and maybe the wiki. I will still pop up from time to time for a little vandal stopping or edits but not often for reasons known to the core shroom staff. Anyway, Happy Christmas and a Happy New Year as well! From next issue, PaperPikachu will be director and it is up to him who his co-director will be (if he wants one).

Hello those out there in the world wide web! I apologize for the absence, my computer is acting up. Not much here to say, YellowYoshi bascially said it all. If you think you are suited to be co-director, PM me on the forums (our forums, what else?), and I will decide who (if anyone) I will appoint. 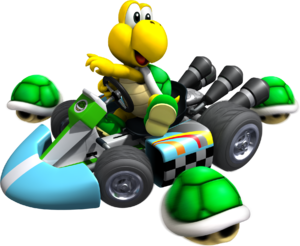 This picture is of a koopa-troopa in his kart in Mario Kart Wii. I like this image because of the detail and shading. It shows one of the items in MKW; The triple shell. It is a nice, actiony picture and quite cute at the same time. Besides, who doesnt like koopas?

This is a paper shy guy form PMTTYD.

[1] From Mario & Luigi: Bowser's Inside Story, this is the theme for the final fight with Dark Bowser and the Dark Fawful Bug. An epic opening a solid body, this song truly fits the final boss battle, and it deserves to be the Soundtrack of the Month.