Hi there, 'Shroom readers, this month there will be a fight between two greedy kings. 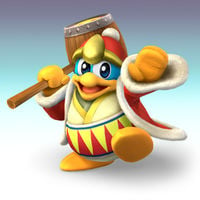 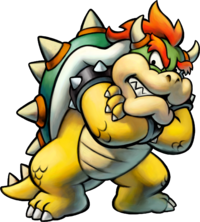 Everybody here knows him well; he's a fire-breathing turtle who wants to conquer the Mushroom Kingdom and capture Peach, but our favorite plumber always beats him.

Role in the series

He's the bad guy who tries to beat the hero but always fails; he has been the antagonist in almost all Mario games and is the Final Boss but in some games he takes the role of hero (like in M&L:BIS, SPM and MRPG) but when this happen is 'cause a more powerful enemy is trying to beat Mario and the Bowser has no other option that work in team with Mario in spin-off games; he's a heavy character but is powerful.

In the very first games he's the classic bad guy who hates the hero, but in more recent games, the hate was transformed in rivalry, and this give Bowser more personality. When Mario beat him he always is seen angry but sometimes he appears more passive (like in SMS).

Role in the series

In Kirby Dreamland he stole all the food in dreamland and was the antagonist but then in next Kirby games he appeared as a neutral character who in various times helps Kirby to beat a more powerful enemy but he always do this in his own benefice not to do a god action, in Kirby 64 he helped Kirby in some levels

As I said, first he was an antagonist, but then in the next games he gained another personality being more kind, but still a evil character; and he's in someway an enemy and at the same time a friend to Kirby.

If you wanna know who wins this month click "show" 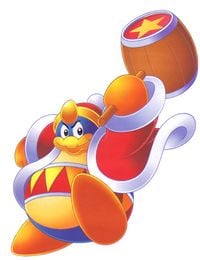 He's a more kind character, and is more friendly, and although Bowser always tries different things, Dedede is more simple (only a hammer (OK in brawl he used a Jet-Hammer)), and has more personality.

So for now we have a tie