Hello, welcome to the Mario Kart Wheel Tips Corner... back to you this month as a special edition due to last month's abscence. So, this time, we're going to take a look at... the diaper characters, the Greedy-fatso's bike, the old-style item, and some Lava courses...

The Characters, the diaper racers, on this special edition, we're taking a deep look at the Babies, starting with:

First appearing behind the Wheel in Mario Kart:Double Dash!!, being a small character, let's take a look at his stats:

Thanks to his light weight his off-road is good, so don't worry about being stuck in grass or sand, even if his top speed is low, his acceleration is great, so you won't be afected so much if you got hit by an item, also to let worries behind, his Chain Chomp will smash, and let you pass over any kind of obstacles, pulling your kart untill he tires... be carefull where the chain breaks, or your race will stay worse. His course is the Baby Park. He reappears in Mario Kart Wii, same as in MK:DD!! he lacks of Top speed, but his acceleration is great, let's see his stats:

Red and blue are his Kart's scheme colors, he got a good weight bonus, but be careful, to not mess with the heavy guys, or you'll be bounced away, and so thanks to his Handling bonus it's easier to take sharp turns using bikes or karts.

Baby Luigi's debut appearance is on Mario Kart: Double Dash!! sharing stats with his older brother, but having his kart as a unlockable one...

Sharing not only partnership with his older brother, also the Chain Chomp, and the Buggies. And his stats for Mario Kart Wii are like this:

He seems to be the owner of Sherbet Land since his ghost is the one there. The two brothers can be light sized, but they can be annoying if they want to, just don't get angry at them or maybe they will cry.

The Mushroom Kingdom ruler loves to race since she was a baby, let's take a look at her stats:

She seems to be a calm baby, but she can be a good racer, even while lacking of top Speed, she can use her acceleration to her own advantage, just keep an eye on her, and maybe you'll be fine. Her Course is Peach Gardens

Baby Daisy's First appearance is on Mario Kart Wii, as an unlockable character, she is good at speed even while being small.. let's see her stats:

She's got her older self's attitude, she really enjoys hitting and passing over other racers, so she'll be sad if she's not the number one!. She's the Moo Moo Meadows owner. 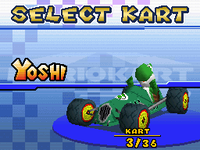 The Cucumber is Yoshi's second kart on Mario Kart DS, it's a dragstyled green kart... cheking the stats:

If you are searching for a kart that suits a Begginer style, this is your kart, it lacks drift and weight but, the other side like Handling and acceleration, well, it's a good kart for beginners! 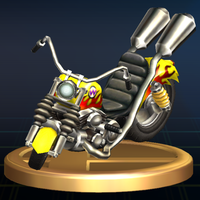 The Wario Bike, is the Heaviest Bike in Mario Kart Wii; it's a Large Bike, that stats list is like this:

This Bike is not so good for you if you want speed, and staying at 1st place so easily, but is great if you search for a bike that keeps a decent speed and accelerates easy... the color schemes varies depending on the character using it:

The Item this time, a classic one... present since Mario Bros.... 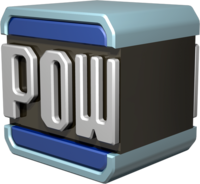 This Item is used in Mario Kart Arcade Grand Prix 2, and it's Waluigi's Special Item, and, if used, it stunnes a random character for about 7 seconds, also it's an item used in Mario Kart Wii, Like Blooper it affects all the opponents in front of the user, it'll make the characters bounce 3 times; the first two are just advertisements, but the 3rd will make you drop your Items and spinn around, losing your actual speed, There's one way to avoid it, even tho you'll loose your items, shake the control in the 3rd bounce and you'll keep your speed just spinning 1 time, also if you are not touching the floor while this 3rd time happens, you'll be not affected by the POW...