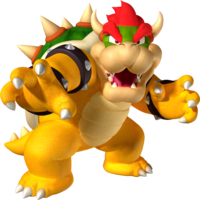 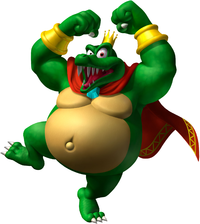 School's Out! That's right, it's July, the terrific no-school month! It's Mario304, here with a comparison I wanted to do since April, a comparison between two evil kings, Bowser and King K. Rool! Who will be the character of the month? Let's see!

Bowser takes on an appearance of a turtle, complete with a spiky shell, a tail that gets on his nerves (That's right, Super Mario 64) and a menacing face.

K. Rool looks like a crazy crocodile. He has a red eye, a crown and a cape.

Bowser made his first appearance in our very own Super Mario Bros. for the NES. Before the game, he was jealous of the kingdom and he wanted to rule it, so he raided Mushroom Kingdom, kidnapped Princess Peach and turned the citizens into stone. In this game, he looked 8-bit and he throws hammers.

K. Rool first appeared in Donkey Kong Country for the SNES. He and the Kremling Krew came to DK Island to steal the bananas for some reason. They locked up Diddy Kong in a barrel and stole the bananas. Unlike Bowser, he looks animated.

K. Rool's goal is to steal Donkey Kong's bananas and taking over the island. Reasons for stealing the bananas is because he was hungry or he wanted the apes to starve to death.

Bowser is a sinister villain who thinks he is an all powerful tyrant. Outside RPGs, he is pure evil and is always serious about his plans. Inside the RPGs, he's a comical villain who is trying to win the heart of Peach. In the RPGs, he doesn't make very good plans, save for Paper Mario.

K. Rool is very, very evil and seems to hate the Kongs and his minions. He sometimes doesn't think clearly in battles and always does the same move again and again. In the cartoons, he is very crazy. Unlike the games, he doesn't make mistakes in battles.

Now to see who is the better king! Is it the evil Bowser or the sinister King K. Rool? Find out below!

BOWSER.- It's Bowser! Bowser is more clearer on his plans then King K. Rool and is also the must comical. I hope you loved this comparison! Farewell and have a great summer!