From the Super Mario Wiki, the Mario encyclopedia
< The 'Shroom:Issue XXVII
Jump to navigationJump to search

Sorry for the small delay. I'm an incredibly lazy person!

Hey everyone! This month's game is one everyone probably knows:
Super Smash Bros

Some interesting elements:
1. Originally, an almost compltely different version of the game was to be produced. The game was to be titled Dragon King: The Fighting Game, and had no Nintendo characters.

2. Using a GameShark, two more Kirby stages were found to be planned for the game. They seemed to have odd features, like invisible walls. 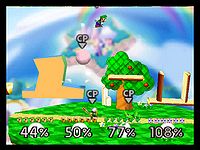 3. It has been suggested that Princess Peach, Bowser, Mewtwo, Meowth, Pit, and King Dedede were supposed to be playable.
4. Final Smashes, and potentially Smash Balls, were supposed to appear. Sakurai even has recordings of the character's voices during these.

I liked these interesting elements. Now, let's take a closer look:
1. You know, that would've just ruined the series. Completely ruined it. Luckily, the game was changed to the current version, as the other would not set the right 'atmosphere,' as Sakurai put it, for a Nintendo console.
2. That stage certainly looks wacky. But being a Kirby fan myself, I couldn't say no to two more stages. As for why I think they were cut out, well, I think it would upset the 'balance' between the series included throughout the game. You know, 3 Kirby stages, and 1 or 2 for the others.
3. Well, let's face it. There is no way the N64 could hold all that data. But expanding the roster would've helped the game, but I guess you could say the small selection it actually had was acceptable. Let's not forget, most of those characters were playable in the later games!
4. Once again, having the bright display of final smashes may very well have just overloaded the N64 system. The fact that the idea existed back then kind of shocks me, but it was a worth while wait to see the smashes when Super Smash Bros Brawl was released.

Another issue, delivered to you on-time. I think this one is my personal favorite because of those pretty awesome beta elements of such a classic game. Well, keep writing that feedback, and I'll see you in the next issue!