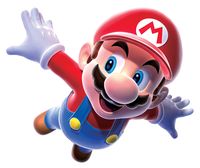 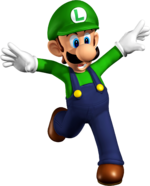 Duh, duh, duh! The ultimate comparison is here! The one we've all been waiting for, Mario vs. Luigi! Since it's the Mario Wiki anniversary, I've decided to bring in this special comparison between two brothers. Ok, let's get this comparison underway! Who will be the better brother? Let's find out!

Mario has a red shirt, blue overalls, a mustache and a red hat. He is also very short and pudgy.

Luigi has a green shirt, blue overalls, a slimmer mustache and a green hat. He is also very tall and thin.

Mario has the ability to jump and kill his enemies. He can transform into Fire Mario in order to throw fireballs and he is very strong. He's slower then Luigi and can use a F.L.U.D.D. to wash off goop.

Luigi jumps higher then Mario, can transform into Fire Luigi and shoot fireballs and he is weak. He's faster then Mario and can use a Poltergust 3000 to suck up ghosts.

Mario is a very brave and courageous Italian plumber. He is always willing to enter dangerous situations alone and he loves spaghetti. He is a very kind person, he really loves the Mushroom Kingdom and he is well-known throughout the kingdom.

Luigi is a coward and he has an extreme fear of ghosts. He also loves spaghetti but he is sometimes jealous of Mario. He lives in his brother's shadow and he is almost unknown to the kingdom.

Mario is the most popular Nintendo character in the world. He has been featured in sports games, adventure games, RPG games, fighting games, puzzle games, other series, TV shows and even toys!

Luigi has been living in his brother's shadow for a long time, however, after Luigi's Mansion was released, he became really popular. Soon, he's been treated as Mario's popular sidekick but he's still jealous of Mario.

This was a very, very, very, VERY hard decision to make. I'm serious! So who's better? Mario or Luigi? Find out below!

MARIO- Mario is better then Luigi! He is braver then Luigi, more popular and he stars in so many games! Good job, Mario!