And you'd think after 11 months I could make the deadline.

This month, I'll look at a must-play game (Which I ironically don't own):
Super Smash Bros Melee 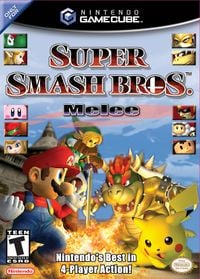 I've always loved the history of smash games, and this one is pretty cool:
1. There are 5 beta stages called TEST, AKANEIA, 10-2, IceTop, and Dummy. These can be accessed via Action Replay.
2. The Japanese version of the game had a completely different Motion-Sensor Bomb, called the Proximity Mine from Perfect Dark. It was oddly changed to the Motion-Sensor Bomb all other releases are familiar with.
3. Many stages had differences from their present state. The "Topi" enemies in the Ice Climber's stage are seals in Japan, but Yeti-like in other versions. The Temple Stage had an elevator leading from the top to the bottom of the stage. Players were able to walk through the labratory in Great Bay, and the Mushroom Kingdom and Yoshi's Story were completely different in design.

Pretty cool, right? Well, here's how I see them:
1. The TEST stage was obviously made to test the game. I bet anyone could figure that out. Plus, the pub-like background doesn't match the game at all. AKANEIA is supposedly a Fire Emblem stage. Now, I'm a fan of the series, so I think putting in a stage for Marth and Roy would be a great idea. However, I believe they removed it because the Fire Emblem games were very obscure to the Western World, so I guess Nintendo figured people would be saying things like "What?" rather than "Cool!" Now I don't know watch the heck 10-2 is supposed to be. I'd say it'd be based off of some Mario Level, but I don't recall there ever being a level 10-2... IceTop seems pretty self explanatory, doesn't it? It's at the Top of something made of Ice, presumably intended for the Ice Climber's use. I envision it as something like Iceberg from Brawl. And then there's Dummy. It freezes the game upon entering it, so you'd fell like...a dummy. Really, I think this was just to scare off hackers, but I not like it's stopped anyone.
2. Censorship. Just censorship. After looking up Perfect Dark on Wikipedia, I discovered it was an M-Rated game. Bombs in an M-rated game. Go figure. Naturally, Nintendo doesn't really want to associate (E-T rated) Mario and Zelda with some M-rated game, so they changed it. Now, they lightly censored the Motion-Sensor Bomb by labeling the game GoldenEye 007 as "TOP SECRET" on the trophy description because it's a T-rated shooter game. It seems as though Nintendo has a problem with violent, first person shooters, but then they'd be hypocrites. (i.e. Samus and the Metroid games).
3. Wow, a lot of changes occurred between Beta and Final stages. The Icicle Mountain stage once featured cute, innocent little seals as enemies. What's worse is that you get to beat them up! They were changed to these ugly, hairy things that don't appear in the natural world. I guess it's just to be sure no little kid is gonna beat up the next seal at the aquarium screaming "DIE TOPI!" Now, the Temple stage having an elevator? Bah, that'd remove the stage's "do-it-yourself" feel, since you'd only have to press a single button to go upward instead of rapidly pressing Y (or X) to jump level to level. I'm not so sure what the labratory would do to the Great Bay stage, except add a bit more fighting room. It may also provide an extra obstacle or two, but I'm not sure. The Mushroom Kingdom and Yoshi's Story stages are on their own, since I haven't seen a picture of their redesigns. Perhaps more/less platforms/obstacles/features. I don't know.

I liked this one much more than some of my other sections. I haven't played this game much, but it's pretty awesome from what I gathered. The beta elements are pretty cool, and some of them were changed for better (i.e. No elevator on Temple), and others, for worse (i.e. exclusion of Akaneia). Thus, my 11th section is finished, and keep writing that feedback!