From the Super Mario Wiki, the Mario encyclopedia
< The 'Shroom:Issue XVI
Jump to navigationJump to search 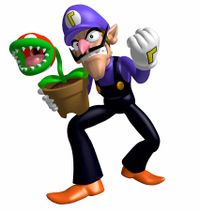 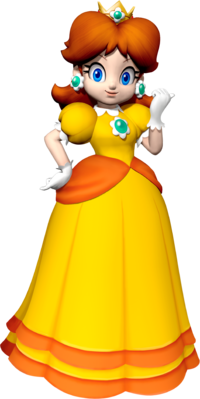 When I first saw this on the signup page, I thought ”Since when has this been here?” Well, no wonder, because despite being suggested as a section, none had been written yet. So, here goes a comparison, based on several categories, between the two biggest non-Big8 Mario characters; Waluigi and Daisy.

Daisy’s first appearance was the well-known Super Mario Land. You might say she even replaced Peach, the usual Damsel. But who knows what can happen in a game series involving Wario, right(not like he was in the game)? Anyway, that’s the only time she was the Princess in need of rescue. From there, she became a regular in Mario Sports games; but that’s a different section.

Waluigi debuted in a very successful Mario Sports game, Mario Tennis for the N64. It is possible(in fact likely) that Waluigi was created to become Wario’s partner in Sports games and Mario Party games, etc. Since then, with the exception of a very minor appearance in WarioWare: Smooth Moves, and another minor appearance in Super Smash Bros. Brawl, Waluigi has been a regular in Sports Games, and has only appeared playable in them as well.

Daisy, as you all, know, is rather tom-boyish, compared to some of the other Princesses in the series. It would probably be interesting to compare Daisy and Rosalina, with such different personalities, but that’s off-topic. She makes friends, like Peach, so I guess she's friendly. Waluigi has a whole bunch of enemies, on the other hand.

So, after appearing in Super Mario Land, what games did she appear in? I won't list them all, obviously, but a general number. Daisy has appeared in: 8 Mario Party Games, 6 Mario Kart games, 1 Mario Golf game, 2 Mario Tennis games, and a bunch of others, like baseball, Olympics, etc. In any of those games, though, her partner was always Peach.

Well, he's appeared in every game mentioned above, plus some others. He had a cameo in Brawl, but even if you don't want to count that, there's still some more. The before-mentioned DDR:MM, he was a semi-minor villain, in Mario Kart Arcade GP, Waluigi is featured as a playable character(Daisy had only a cameo). But besides those, every sport game Daisy is in, Waluigi has been in. Or vise-versa.

So, after comparing those two characters, seeing the pros and cons, what do you think? It's hard for me to come down with a conclusion myself, because if I did, people would rant about how I'm biased, the other character's better, yaddayaddayadda. Anyway, here's the winner, based on the categories:

WALUIGI -- He has been in more games, his personality is interesting, and he has a moustache. But it's all a matter of opinion, so don't sue me. These two will forever be regulars in any Mario spin-off title.