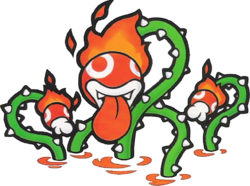 Hey guys! I just returned from Florida where I had a beautiful 15 days in nice warm sun; anyone from northern Europe/Asia, the northern states of the U.S. or pretty much anywhere in Canada will understand what I’m saying. But for those of you who weren’t lucky enough to experience the beautiful warm weather of the Bahamas (went there too), I’ve (hopefully) come up with an alternative for you. I chose the Piranha Plant boss from the first game of a very successful series (it is one of the titles announced for the 3DS). Anyone who knows their piranha plants will have guessed it, I chose Lava Piranha!

Lava Piranha appears in Paper Mario where it is the final boss fought on Lavalava Island. Bowser orders him to guard the lovely Star Spirit, Misstar and when Mario comes to get the heavenly spirit, Lava Piranha attacks him! Lava Piranha fights with two Lava Buds in a two-part battle. The first part is a normal battle, then during the second part, his Lava Buds get fiery and he sticks out his tongue (which obviously makes him harder to defeat). Anyways, when Mario beats him, the Volcano Erupts and he runs off with Misstar – but that’s a story for another time, for now I will sign off by saying, Lava Piranha has faded into obscurity.