Welcome to Mario Kart: Wheel Tips Corner. Your friend Coincollector is here to tell you the tip of the month.

This time I want to tell you all about two karts that appear in Mario Kart DS, the B Dasher and the Shooting Star. (Not the other Shooting Star!) These two vehicles, along with the Standard Kart MR, belong to Mario. However, I'll only talk about his two exclusive karts on this occasion. 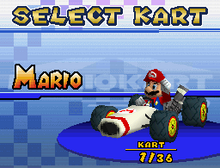 The Mushroom Kingdom's Honda RA272, aka B Dasher.

The B Dasher is the first alternative vehicle available for Mario when you begin the game. According to the stats seen in-game, Mario's B Dasher has:

As you can see, the B Dasher is an all-round vehicle, suitable for beginners as it has very balanced stats. It also provides a very high item ratio as a bonus, allowing you to get a wide variety of items and take advantage of whenever you need. 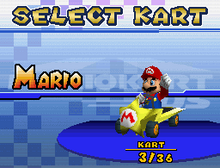 It's just me or did Mario steal Kirby's warp star and pimp it into a kart?

The Shooting Star is the other alternative, but to unlock it you must complete all of the cups in 100cc and earn gold trophies. These are its stats:

Unlike the B Dasher, the Shooting Star has very uneven stats. It's slightly faster than the B Dasher but shares the same acceleration. The handling and drifting are a bit higher, so it is possible to take tight corners with ease while drifting, whereas the weight is considerably low, making it easy to be pushed away by a heavier kart like its counterpart the B Dasher. The Shooting Star also sacrifices its item ratio, meaning you may not obtain rare items as frequently as the B Dasher can.

Personally, I would choose the Shooting Star as it has superior stats to the B Dasher, and I am a skilled player. Although in my days as a newbie, the B Dasher was the best option. It allowed me to learn the basics of driving, but I would never recommend it for intense or difficult races.

Well Shy Guys, that's about all for MK: Wheel Tips Corner this month. Remember to look both ways before crossing the road or else Mario will push you away with his B dasher. Hasta Pronto.