Hello guys, this is your friend Coincollector, here for the tip of the month and forced ready to give you the first tip of this year, so get behind the wheel and fasten your seatbelts because we’re going to take a tour of Mario Kart: Double Dash’s Luigi Circuit. 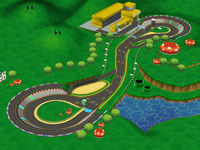 The good thing is that you’ll see your friends again in the middle of the track.

This course is one of the most basic, with very few gimmicks and rough terrain areas that cause you to lose speed. Even the corners are smooth, wide, safe and have a lot of dash panels to give a speed boost if you are too lazy to press the button to accelerate.

But this Luigi Circuit is not notable for having these features. The most remarkable thing in this circuit is that it has the only two‐way road found in the Mario Kart series. It seems weird to me that only the first racecourse has this and even more that you can’t make a lap if you haven’t run all along the course. Also, with this feature, you’ll always have your opponents near and ready to use any potentially dangerous item to create chaos in this section of the course. If you are playing this circuit in 50cc, this feature is not present and the course is divided by a median with banners, making the race safer and less mobbed. 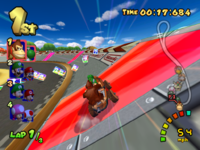 You can use the dash panels to boost.

At the beginning of the course you have to pass the speed ramp in front of the starting line to enter the two‐way road that is a long and slightly curved stretch and then enter to a corner with many dash panels next to it. You can take the dash panels, but if you want to save time, you can drift on the inner side of the curve. Right after to this we’ll find the second speed ramp that we have to pass to enter the two‐way road again. Just as we did before we will enter another, tighter curve with dash panels as well that leads to the checkered line, and so we complete the lap.

There is only one obstacle in this Luigi Circuit and is the big Chain Chomp guarding a small piece of rough terrain. It is not a real threat for the drivers, although it can recklessly ram the vehicles that invade a small part of the road.

This circuit has a shortcut right before the first corner of the track. The shortcut is a detour that begins in the middle of the two‐way road and runs behind a sandy zone away from the main route and ends to the row of dash panels of the curve. Just take care with the Chain Chomp that is alert to any driver that comes into its territory; if you aren’t quick you could receive a nasty surprise from this fanged dude when crossing the shortcut.

The course also has a narrow branch at the beginning of the second corner. This isn’t really a shortcut but a way to get an item aside from the Item Box group found in the main route. Both the shortcut and this optional way are not present when playing in 50cc.

I have some other funny facts about this Luigi Circuit. If you look in the background, you will notice that there is a restored version of Luigi’s Mansion. In the sky there is floating a blimp with the words “Luigi Circuit” on it. The course also has a yellow building with a garage next to the starting line but I don’t know really what that is…

Well, that’s about it for the tip of the month. Remember to look both ways before crossing the road or else you’ll be going the wrong way in this circuit.

Breaking News! We have a longer and clearer demo video of the upcoming Mario Kart for the 3DS. You can see the off‐screen video here during this year’s Nintendo World conference in Japan. All that I can say is that is quite similar to Mario Kart Wii in terms of graphics, and the two new courses look good. What I would infer from this demo is that it looks like the gameplay is similar to Mario Kart Wii to some extent ‒ Big jumps, Bouncing ’shrooms… tricks’ comeback, anybody?