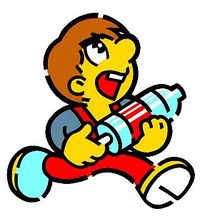 Is this a rip‐off of the Simpsons?

The MarioWiki is filled with many mysteries. What’s the difference between a Pyrosphere and a Lava Bubble? Why is there no article on Weegee? What is this? And why on earth do we have this article? But today, I, Marioguy1 (talk), am here to answer the greatest mystery of all…who the heck is Stanley the Bugman?!?!

Well, to answer this great mystery, we’re going to have to delve into the past, all the way back to the little‐known third member of the Donkey Kong (arcade) trilogy; Donkey Kong 3. In this game, Stanley makes his debut appearance in a non‐Game & Watch game as a playable character. His goals are very simple; use a can of bug-spray to take down an ape four times his size (hey, if Mario can do it with plastic wind-up toys, why not?). Anyways, Stanley is trying to rid his greenhouse of DK, as DK is causing all kinds of trouble. Getting rid of DK saves Stan’s vegetables and everyone’s happy.

Stanley and DK have a lot more fun in a bunch of Game & Watch games, until finally Stanley makes his way into the Wario series. He appears in three 9-Volt minigames and one 18-Volt minigame throughout the series, making only cameo appearances – a great downfall for a character who was once the main protagonist of a mainstream game. What happened to Stanley the Bugman? Why has he been demoted to useless‐cameo‐in‐sub‐series‐guy? Stanley’s life is truly shrouded in mystery, and, like all other mysteries covered in this section, he has Faded into Obscurity.