From the Super Mario Wiki, the Mario encyclopedia
< The 'Shroom:Issue XCI
Jump to navigationJump to search

Hi, welcome to The 'Shroom, Mario Kart: Wheel Tips Corner! This month we'll be boarding the hype barrel train after the recent release of Super Smash Bros. For Nintendo 3DS! But What do Mario Kart and Smash have in common? Well, there's more than you might think...

The Koopa Clown Kart (heh) is an unlockable kart body that appears in Mario Kart 7. It's shaped upon the actual Koopa Clown Car, except that it has exhausts, a seat, a driver's wheel, wheels and no back. It's relatively small, and makes Bowser look like he's riding a tricycle when driving in it. The idea of this kart was turned into a move for Bowser Jr. in Smash 3DS, where his Junior Clown Car gains wheels (which, contrary to popular belief, aren't the Wood tires), two back exhausts, and an engine, which looks a lot like an updated version of the kart, which may be hinting something. (*ahem*MarioKart8DLC*ahem*) The Kart itself doesn't add much to anything aside from handling, while giving up some acceleration and off-road while it does so, making an unusual kart, as handling and acceleration are usually paired together. Other than a handling boost, the kart doesn't do too much, so if it's a kart that offers handling with no strings attached that you're looking for, this is probably one of the best karts to go to. 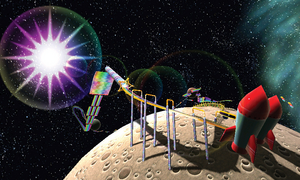 Rainbow Road on Mario Kart 7 is probably one of the more popular Rainbow Roads due to it's inventive layout. It has corners that bend, and unlike Mario Kart DS or Wii, don't curve enough to send people sliding off the track. The course also features a section that doesn't even take place on the road, instead riding on the moon with more floaty physics or the ring of a planet. (Aren't rings around planets made of moons?) The course also reappeared as a stage in Super Smash Bros. For 3DS as a Port Town Aero Dive type stage, except combining the Shy Guys from Mario Circuit instead of the F-Zero racers, a clever combination that makes the stage a bit safer than said F-Zero course. 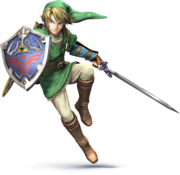 No, you can't use that sword to hit other racers.

The Hero of, um, karts? has recently joined in Mario Kart 8, which raises a lot of speculation and questions, but also a lot of exitment and joy. The first non-Mario character to enter Mario Kart series was R.O.B. and then the Mii's, which in an interview were stated to be a hard decision to have them in as they aren't Mario characters. They didn't want a "Smash Kart" game, and yet they seem to have changed their minds. Which wasn't a bad idea at all. Now everyone can enjoy having Link on something other than a Horse, Boat, Train or Bird. So then there is another question, which Link is the one driving here? To answer that, it is the one from Skyward Sword, however his kart has the same colouration as the Hyrule Warriors incarnation. No matter which Link he is though, he is still the main character of The Legend of Zelda and a fun entry to the series.

And that wraps up my this Smash-themed issue. Hope you have a smashing time out there with the Koopalings, the pretty pink piece of gold that EVERYBODY loves and the Baby of the Cosmos. Remember that amiibo has been confirmed to work with Mario Kart 8, so we may be getting some sort of exclusive content that's compatible with Smash, so don't be too skeptical on buying a figure of your favourite character. See you next month, and remember, Spiny Shells are in Smash. Have fun getting blown up!