Warning – This page contains harsh language, vulgar content, spoilers. If you are offended by such materials, turn back now while you still can.

February Section of the Month

Congrats to NSM, who was the only one to send in a section last month… so his Movie Reviews section edged out his Smash Time section!

My apologies for the lateness. Here is the article! (I have decided to try and go back to monthly articles rather than bimonthly, my schedule has opened up recently.

Hello guys, and welcome to the Entertainment Review, with. Remember guys that I will have the video down below, and a link to the Youtuber who made the video's page. If you have any suggestions for the views, I have no problem taking you, and thank you once again. 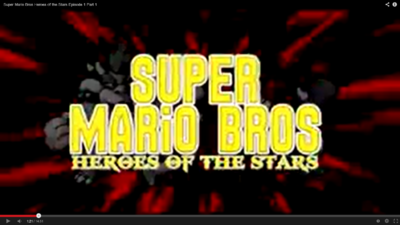 The Video I am currently reviewing is called Super Mario Bros. Heroes of the Stars, which is an animation about the Series. For the introduction, it seems interesting, the title theme is not bad. The theme was almost definitely intended to replicate an anime theme song, which despite the fact that I like anime, I would prefer that the theme song be in English, rather than that, which I cannot tell whether it is Japanese of Gibberish.

For the content of the video, I'd say the story quality is pretty good, and the animation is pretty good too. The characters look a little to pixelated (not a real word :P) for my liking, which when it goes to close ups or you make it full screen, makes things look pretty crappy. Now, to the dialogue. The dialogue is pretty good, but I'm guessing the creator's first language is not English, because the grammar is not that great. There will be times when the grammar makes you think What? for a few seconds. The dialogue is also a bit to formal, real people do not talk that formally. They would use more abbreviations than that. Also, Luigi I quote says "Thank you. That's-a so nice of you, Mister Parakarry-san. When did Luigi become Japanese?

Well, thank you guys for reading my article, I give this video about a 7/10, not bad for a fan-fiction.

Hey guys, its NSM here with Smash Time! Since last time we have had Diddy Kong and Little Mac announced! Diddy Kong looks basically the same as before so I’ll skip over him and get to the good stuff.

Little Mac from Punch-Out was one of the more obvious additions to the game, so it’s good to see him here, because well, he’s a fighter. He just fits so well. Little Mac is short, just as the name implies, with Samus towering over him. Little Mac’s big mechanic is the addition of a power meter that allows you to use an extremely powerful uppercut when charged. From what we’ve seen, it should be able to one-hit KO foes, so it’s going to be very powerful if you get hit with it. Most of his standard attacks are punches, which should be pretty obvious, considering he’s a boxer. He’s also been stated to have a poor aerial game and is more suited to the ground. (Which I would hope so because his recovery sucks). So I mean, although Little Mac looks powerful with his uppercut, I think he’ll balance out because his air game is probably one of the worst in the game. We’ve also gotten the opportunity to see his Final Smash, which is Giga Mac. From what we’ve seen so far it should operate similar to Giga Bowser, being a slower, more powerful version of Little Mac.

Well that’s it for Smash Time guys! I’m going to ask a question on the forums for next issue just like last time because I think it really worked, and I think you guys enjoy more when I have more stuff to talk about. So anyway, see you guys next time!