Hello, all! I hope life is treating you right! This month, check out ‘Featured Character Artwork’ for sure- a very familiar face in a very familiar game makes an appearance! As always, we are always looking for new artists! If you’d like to contribute, whether one-time or monthly, send me a PM or a message and we’ll sign you up! Let’s get to it, then! 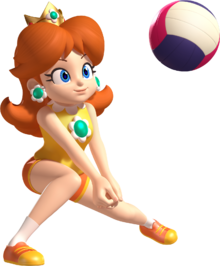 Hi, everyone, and welcome to Featured Character Artwork!!

Beach Volleyball is one of the real-life sports included in Mario & Sonic at the London 2012 Olympic Games, and Daisy's artwork from the game shows her playing said sport. This high-quality picture depicts Daisy wearing her main athletic outfit – a yellow tank top, orange shorts with yellow accents, a pair of orange-and-yellow tennis shoes and white bobby socks – while making an underarm pass, also called a bump, during a Beach Volleyball match. 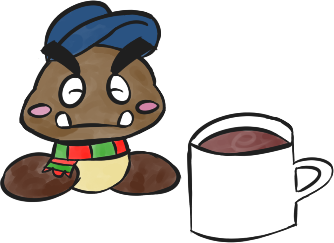 Why is the cup about his size? Why is there a handle on it if he has no arms? I don't know. You probably don't know. No one knows.

Incidentally, I probably should have drawn something like this for December instead, but what can you do? Maybe I'll draw something else then.

November brings Thanksgiving, exams, and long, lazy holiday breaks ahead! Not to mention the cold. On that note, our Featured Sprite is this, of an Icead, from Mario & Luigi: Dream Team:

. Poor thing looks a little chilled, perhaps it should get together with a Magmad and hopefully warm up a little! (Although that would defeat the point, I suppose.)